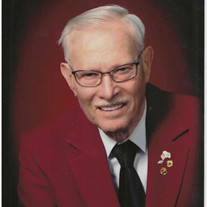 James Hickerson “Jim” Ellis, U.S. Army veteran and longtime community volunteer, died Saturday in Bartlesville. The 87 year young gentleman served not only his country but his community, particularly as an active Shrine Noble and Freemason. Jim was born the son of James Hogg and Thelma (Hickerson) Ellis in Plains, TX on Nov. 24, 1934. He grew up in Texas and played in the school band. He furthered his education at Texas Tech Univ., graduating in 1956 with a Petroleum Geology degree. He started his career with Phillips Petroleum Co. in 1956 in Odessa, TX, before entering the U.S. Army serving with the field artillery at Fort Sill in ‘57-‘59. Once honorably discharged Jim returned to Odessa until his transfer to Bartlesville in 1963. From ‘65-‘72 and ‘76-‘79 he worked in Oklahoma City and ‘72-‘76 to Jackson, MS. He travelled extensively across the southern states and his last posting before returning to Bartlesville was in Denver, CO, ‘79-‘81. Jim retired after 32 years of faithful service in 1988. That same year he was united in marriage with Jessie on June 13, 1988, in Miami, OK. They had met at a dance in ’86 and found they shared a heart for their community. Jim and Jessie both retired and dove into their passions: Jim’s was the Masonic brotherhood and Jessie, her volunteer work. Jim truly loved the Masonic brotherhood - some members find the memory work to be overwhelming, but Jim loved putting in the long hours needed to memorize every bit and his knowledge and ability inspired others in the lodge. He was a Master Mason and Past Master of Bartlesville 284, Scottish Rite, York Rite Past Commander, Akdar Shrine, and Wasono Shrine Club Past President. Every year, Jim enjoyed riding the bus with school kids the Wasono Shrine Club takes to the Akdar Shrine Circus. He also got a kick out of driving his Corvette in many parades as a Shriner. Jim was proud to help raise funds for the 22 Shrine kids hospitals across America but not too proud to man the annual Vidalia onion sales in the lodge parking lot. He loved volunteering at the Masonic Lodge: cooking eggs for the monthly breakfast or working the door, selling holiday nuts for the Shriners and much more. Jim and Jessie were each other’s constant companion – they enjoyed eating out and going to his many Shriner and Masonic events and meetings in Guthrie, Muskogee and Tulsa, as well as Bartlesville. They even “partnered up” on the golf course: Jessie drove the cart and Jim played the holes. At home, Jim liked keeping up with the 24/7 news on his favorite channel, learning and keeping his mind sharp. Jim’s wit and compassion will be dearly missed. Jim is survived by his wife Jessie of the home, daughter Kelly Jones and Danny, grandchild Garret Dunkle, nephews James Michael Rushing and Cecil Jay Rushing, and niece Terri Ann Rushing. He is preceded in death by his parents and sister Laura Ann Ellis Rushing. Visitation will be held Friday from 10-8 and Saturday 10-5 at the Davis Family Funeral Home & Crematory – Walker Brown Chapel, 918-333-7665, 4201 Nowata Rd, Bartlesville. Services will be held at a later date at the Bartlesville Masonic Lodge. Services are under the direction of Carter Davis and Davis Family Funeral Home & Crematory – Walker Brown Chapel. Share condolences and remembrances at www.DavisFamilyFuneralHome.com.

The family of James "Jim" H. Ellis created this Life Tributes page to make it easy to share your memories.

Send flowers to the Ellis family.