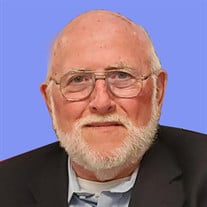 “Precious in the sight of the Lord is the death of his saints.” Psalm 116:15 On a beautiful Sunday morning and in the middle of his beloved Sunday school group, Jim Leinen went home to be with His Lord and Savior on November 21st, 2021 in Bartlesville, Oklahoma. Jim was born in Hobart, Oklahoma to George Charles Leinen & Wilva Louise Schweikard Leinen on October 10th, 1944, both of whom preceded him to heaven. He was also preceded in death by his infant son, Jerry Jay Leinen, his sister, Denna Leinen Bedard, and his doting and favorite mother-in-law, Carolyn Hitt. His whole devotion was to his Lord and Redeemer, Jesus Christ. His lasting hope was for all his loved ones to also surrender their lives to his Jesus. Jim’s second devotion was to his family. He is survived by his loving wife of 39 years, Karen Leinen, whom he utterly cherished; by his three children: sons Jeff Leinen of Philadelphia, Pennsylvania, and Jason Leinen and wife, Julia, of Oklahoma City, and daughter, Kristyn Leinen of Bartlesville; by seven grandchildren: Mackenzie, Jasmine, Karalyn, Jocelyn, Jamisyn, J.D., and Kyra Leinen. All seven grandchildren blessedly and proudly bear his last name and will carry on his legacy for generations to come. He is also survived by his sister-in-law, Kim Powers and partner Kevin Lindecamp of Oklahoma City, and his brother, Bill Leinen of Hobart, Oklahoma. Jim’s life was one marked by selfless service to his family, to his friends, to his church, and to his community. God gifted him in teaching, serving as a Sunday school teacher at First Baptist Church for over twenty years, and as a soccer coach for all his kids’ youth soccer teams. Jim never found a project that he couldn’t tackle and tirelessly labored alongside Karen during numerous craft shows, Bartlesville High School musicals, and Civitan events, including coordinating the installation of the Civitan Dinosaur Park, a handicap accessible children’s playground in central Bartlesville. However, Jim was most known in the community for who he was, not just what he did. Although he advanced in his career through various positions at Southwestern Bell, Williams, and Phillips Petroleum Company, his favorite title wasn’t from a job. It was “Grandad,” as he was called by his seven grandchildren, including two of whom he helped raise during his “retirement.” A patriotic soul, Jim’s passions included fishing and shooting, recently building his own gun with his son. He was considered the master at making biscuits and sausage gravy, a frequent request of his grandchildren. Jim was a regular “Clark Griswold” during Christmastime and famously checked every single light bulb individually. A life-long hot air balloon enthusiast, Jim finally achieved his dream of riding in one in Albuquerque, New Mexico in 2018. Jim’s seventy-seven years on this Earth were exemplary in service, kindness, generosity, and selfless love. He leaves a legacy behind of a life well-lived and will be forever remembered by his loving family and friends. In lieu of flowers, the family requests donations be made to: First Baptist Church of Bartlesville, Youth Ministry, 405 S Cherokee Avenue, Bartlesville, OK 74003. Jim’s family will host a visitation from 5:00-7:00 p.m. on Friday at Davis Family Funeral Home & Crematory, Walker Brown Chapel in Bartlesville. Funeral services will be held 11 a.m., Saturday, November 27th, at First Baptist Church of Bartlesville with Dr. James Biesiadecki officiating. The service will be livestreamed - to access it, go to www.mybfbc.org, hover over the top menu "WORSHIP WITH US" and select "LIVESTREAM." Services are under the direction of Carter Davis and Davis Family Funeral Home & Crematory – Walker Brown Chapel. Online condolences and remembrances may be made at www.DavisFamilyFuneralHome.com

&#8220;Precious in the sight of the Lord is the death of his saints.&#8221; Psalm 116:15 On a beautiful Sunday morning and in the middle of his beloved Sunday school group, Jim Leinen went home to be with His Lord and Savior on November 21st,... View Obituary & Service Information

The family of James "Jim" George Leinen created this Life Tributes page to make it easy to share your memories.

“Precious in the sight of the Lord is the death of his saints.”...

Send flowers to the Leinen family.