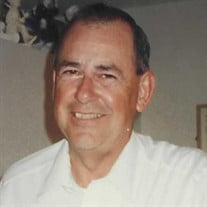 James (Jim) Edgar Kahler, U.S. veteran, Phillips Petroleum retiree and longtime Dewey resident was 79 when he passed away on February 19, 2021, at Forrest Manor Nursing Center. Jim was born in Roxdale, Missouri, on July 28, 1941, to Leland Webster and Emma Jo (Ginn) Kahler. He graduated high school in 1960 from Miami, Oklahoma. Upon graduation, he enlisted in the U.S. Navy in August 1960 and served on the USS Iwo Jima which was the lead and first ship of her class and type as a dedicated helicopter carrier. He trained as a Radioman to communicate via Morse Code and was honorably discharged in August 1964. Jim attended Franklin Tech in Joplin Missouri where he studied electrical repair. He married Janet Lynn Johnson on February 5, 1965. In addition to the four daughters and one son and one grandson they raised, Jim and Janet adopted everyone they cared about into their large family. Together, they doted on their grandkids and the wiener dogs Toots and Tonto. They loved having the whole family over to their house or to hang out outdoors fishing together. In February 1966 he started a career with B. F. Goodrich until suffering an injury in the late 1970s. He attended Okmulgee State Tech and graduated in May 1980. He then moved his family to Dewey in 1981 where he started his final career with Phillips 66 Company and worked there for almost 20 years. Towards the end of his electrical engineering career he worked as a contractor in Puerto Rico and Houston, Texas. Jim’s passions in life included woodworking and being handy around the house. But his true calling was to make people smile, regardless of whether the weather was sunny or stormy. Later in life, Jim cared for his wife Janet during her long courageous battle with cancer. Over the past three years, Jim become friends with his caregivers at Forrest Manor. Jim is survived by five children: Cheryl White (Ron) of Coffeyville, KS, Gwen Kahler of Dewey, Mendy Dotson (Tod) of Douglass, KS, James (Eddie) Kahler, (Shana) of Dewey, and Kathy Conner (Bobby) of Ochelata, as well as two brothers: Bill Kahler (Davene) of Fairland and Mike Kahler of Sallisaw; nine grandchildren; 23 great grandchildren; numerous nieces and nephews; and many friends. He was preceded in death by his parents, his wife Janet, one sister Barbara Lindsley, one grandson Jacob Conner and one great grandson Austin Kahler. Family will receive friends on Thursday, 5-8 p.m. at Davis Family Funeral Home – Dewey Chapel, 918-534-3030, 113 Osage, Dewey, OK 74029. Visitation will also be held on Thursday from 10-8 p.m. and Friday, 10-8 p.m. In lieu of flowers the family has requested for donations to be made to Concern at PO Box 404, Bartlesville OK 74005. No formal services are planned. Services are under the direction of Carter Davis and the Davis Family Funeral Home – Dewey Chapel. Online condolences and remembrances may be shared at www.DavisFamilyFuneralHome.com.

The family of James E. Kahler created this Life Tributes page to make it easy to share your memories.

Send flowers to the Kahler family.