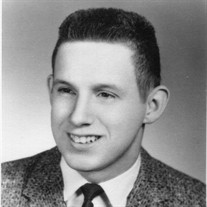 James Morrison, 74, of Ochelata, died Sunday in Bartlesville. He was an Army veteran, and gifted auto mechanic who will be greatly missed by his loving wife Linda of the home; and two children, Glenda Faye Woolever and Danny of Shawnee, and Rob Morrison and Tracy of Bartlesville. James was born the son of Robert Eugene and Clarabel (Philpott) Morrison on Aug. 29, 1945, in Bartlesville. James was raised in Copan and on the weekends, his father loved going to the lake, taking young James out there for father-son time. Moose - as many of his friends called him - graduated from Copan High School in 1963 and furthered his education at Oklahoma State University Institute of Technology in Okmulgee, OK. During this time, the Vietnam War was going on and James was drafted into the U.S. Army, serving stateside and was stationed in Chicago during the violent riots sparked by the assassination of Martin Luther King, Jr. While home on leave James married Linda Kay Perkins and they were blessed with two children Glenda and Rob. Once honorably discharged James finished his schooling and returned home to start his 30-year career with Doenges Ford of Bartlesville. Linda preceded him in death in 1973. Through his mother James became acquainted with Linda Wilbanks and a relationship soon formed. James and Linda united in marriage on June 12, 1980, making their home in Copan before moving to Ochelata in 1983. Once retired James opened his own shop at the house and stayed as busy as he wanted to be for many more years. Although he finally retired James never stopped working on his many projects out in the shop. From a young age, James formed a passion for cars, mostly Ford. He shared his lifelong love with his kids and helped them with their first cars. They have fond memories of childhood adventures spent in the dunes at the Little Sahara State Park in western Oklahoma running their dune buggies. James always had a project car or muscle car including his ’68 Ford Fairlane 428 Cobra. He also loved motorcycles and always had a bike to ride, whether it was ferrying the kids to school or taking Linda on a long summer night’s ride. Later Linda and James took many enjoyable trips, biking cross country. One memorable trip was an Alaskan cruise given to James by Doenges Ford on his 30th anniversary with the company. James is also survived by one brother David Morrison and Carol; three sisters, Margaret Deshazo and Don, Bonnie Morrison, and Jeannie Little; six grandchildren, Kay Sanders, Jennifer Woolever and Daniel, Kelly Sanders, Abbey Carver and Chase, Alex Morrison and Bella Morrison; and four great grandchildren, Paisley, Isiah, Cooper and Carsin. He is preceded in death by his parents and first wife. James’s family will receive friends at the Davis Family Funeral Home & Crematory – Walker Brown Chapel, 918-333-7665, 4201 Nowata Rd, Bartlesville, on Friday, from 6-8 p.m. Services are under the direction of Carter Davis and the Davis Family Funeral Home & Crematory – Walker Brown Chapel. Online condolences and remembrances may be shared at www.DavisFamilyFuneralHome.com.

James Morrison, 74, of Ochelata, died Sunday in Bartlesville. He was an Army veteran, and gifted auto mechanic who will be greatly missed by his loving wife Linda of the home; and two children, Glenda Faye Woolever and Danny of Shawnee, and... View Obituary & Service Information

The family of James Robert Morrison created this Life Tributes page to make it easy to share your memories.