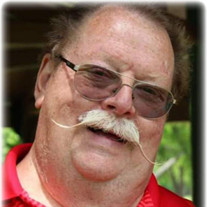 James Watkins, 69, of Copan, OK, died Sunday in Copan. He was a lifelong area resident, who was born in Bartlesville, grew up in Dewey, made Copan his hometown and lived surrounded by loving family, friends coworkers and neighbors. James - or Jim as he was known and Jimmy to some - was born the son of William “Bill” and Betty (Long) Watkins on March 2, 1951 in Bartlesville. He was the middle child with three older and younger sisters and the siblings were raised in Dewey. Jim attended Dewey schools graduating with the Class of 1970. Jim was very fond of the Volkswagen Bug he owned in high school, but he never knew where it was or who was driving it because his friends borrowed it while Jim was at school or work. While attending a dance at the Copan Round-Up Club, Jim met the love of his life April Grant. They married on March 30, 1973, and enjoyed 47 years together. In 1977 they moved to their current home in Copan and raised two children Jamey and Kimberly. Jim worked as a machinist most of his life at Reda Pump, Phillips and for Central States before retiring a few years back. Jim was active in the kids’ many school activities and helped coach their ball teams. When the kids were small, the family enjoyed camping and the outdoors. Hunting and fishing along with small engine repair is what Jim enjoyed doing. He could regularly be found junking for lawn mowers and weed eaters to rehab. Together Jim and April enjoyed riding their Honda Gold Wing touring motorcycle, owning three bikes over the years with the last one a trike, and riding with the “GWRRA” Gold Wing Road Riders Association. Jim was kind and always willing to volunteer, serving on the Copan Volunteer Fire Department for several years, and most recently as a cook with the Copan Senior Citizens. Jim was known for his handlebar mustache and his love for everyone around him. He will be dearly missed and fondly remembered for his big smiles and bigger heart. Jim is survived by his loving wife April of the home; mother Betty Watkins of Dewey; daughter Kimberly Camacho and Sam of Bartlesville; six sisters, Daisy Dupas and Gus, Billie Pierce, Bonnie May, Wilma Young, Carolyn Owens and Marie Miller; six grandchildren, Trenton Watkins, Grant Starr, Mason Veach, Samuel Camacho Jr., Marcus Camacho and Natasha Camacho; two great grandchildren Braden and North Starr; and a host of other family and friends. He is preceded in death by his father, son James “Jamey” Eugene Watkins II, and daughter-in-law Corina Watkins. Jim’s family will receive friends at the Davis Family Funeral Home – Dewey Chapel, 918-534-3030, 113 S. Osage (Hwy. 75), Dewey, on Sunday, from 4-6 p.m. Visitation will also be held on Sunday from 12-6. Funeral services will be held 10 a.m. on Monday, at Northpoint Assembly of God. Interment will follow in the Dewey Cemetery. Services are under the direction of Carter Davis and the Davis Family Funeral Home – Dewey Chapel. Online condolences and remembrances may be shared at www.DavisFamilyFuneralHome.com.

James Watkins, 69, of Copan, OK, died Sunday in Copan. He was a lifelong area resident, who was born in Bartlesville, grew up in Dewey, made Copan his hometown and lived surrounded by loving family, friends coworkers and neighbors. James -... View Obituary & Service Information

The family of James Watkins created this Life Tributes page to make it easy to share your memories.

Send flowers to the Watkins family.