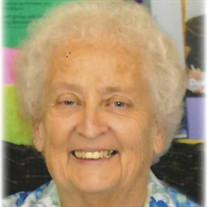 Jane Ryan, lifelong Bartlesville resident, 85, has journeyed on to her Heavenly Home where she will be reunited with her husband Rusty for all eternity. The Lord’s good and faithful servant will be missed by her family and friends but they rejoice in her eternal salvation. Since the time she was 14 years old, Jane served the Lord at the Bartlesville First Church of the Nazarene, spanning some 45 years. But truth be told, Jane loved the Lord and the lifelong church member faithfully lived her entire life tending to his flock that includes the children blessed to call her “Mom” and “Grandma.” Other roles Jane excelled at include counselor and encourager, steward and historian, and loyal friend to many. Norma Jane Ryan was born to Gilbert Addison and Era Pearl (Savage) Doggett in Bartlesville on Aug. 4, 1936 – the hottest day on record in the 20th century. She grew up across the street from the cemetery where she played and practiced reading the grave markers. Her first job at the church was to help with bulletins. After graduating College High in 1954, she went to work at Union Natl. Bank. Jane first met Rusty Ryan at the Dewey skating rink. She fell for the charming “jokester” and a relationship ensued. She helped lead Rusty to know Christ as his Personal Savior during that time. They united in marriage on Nov. 17, 1956, in Bartlesville and raised four children at their Oak Park home. Jane was the “best mom” but make no mistake, she was in charge of running the household (like she managed the church office!) and Rusty never had to worry. She would load up the station wagon with the kids for games, Bible School, etc. Her word was as good as gold and she could fix anything. Jane not only worked at the church office, she cleaned local schools alongside Rusty, and helped their kids with paper routes. Later, she volunteered at her daughter-in-law Shelly’s classroom, helping kids to read for 20 plus years! Jane had a soft spot for kids and children’s ministry. Rusty and Jane loved taking the children camping and on a special vacation every year while they were young, oftentimes to amusement parks. They enjoyed mini trips to Branson, OSU games, and anything the grandkids were involved in. Rusty preceded Jane in death in 2019 after 63 years of loving marriage. Jane is survived by her four children, Kim (Lonnie) Lyon, Rick (Carol) Ryan, Ron (Shelly) Ryan, and Kelly Ryan; sister Phyllis (Jim) King; 10 grandchildren, Jeremiah (Jill) Lyon, Josh (Emma) Lyon, Jamie (Scott) Thompson, Lindsey (Andy) McAdams, Jason Ryan and fiance Tara Price, Megan (HP) Wright, Holly (BJ) Waits, Rachel (Brandon) Hastings, Kaley (Duane) Moore and Nick Schaid, 18 great grandchildren and one great great grandson. She is preceded in death by her parents, husband Rusty, sister Joyce Galegar and brother Benny Doggett. Jane’s family will receive friends at the Davis Family Funeral Home & Crematory – Walker Brown Chapel, on Wed., from 6-8 p.m. Visitation will also be held Wed. from 10-8 and Thur. 9-12. Funeral services are Thur., 2 p.m. at Bartlesville First Nazarene Church with Rev. Rene Colaw officiating. Interment will follow in the Dewey Cemetery. Services are under the direction of Carter Davis and Davis Family Funeral Home & Crematory – Walker Brown Chapel. Share condolences and remembrances at www.DavisFamilyFuneralHome.com.

Jane Ryan, lifelong Bartlesville resident, 85, has journeyed on to her Heavenly Home where she will be reunited with her husband Rusty for all eternity. The Lord&#8217;s good and faithful servant will be missed by her family and friends but... View Obituary & Service Information

The family of Jane Ryan created this Life Tributes page to make it easy to share your memories.

Send flowers to the Ryan family.