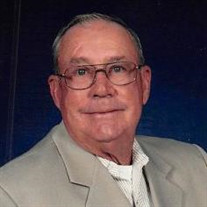 Jay Preston "JP" Clark passed away at Jane Phillips Medical Center in Bartlesville, Oklahoma on Thursday, March 7, 2019. Following JP's wishes, cremation has taken place under the direction of Potts Chapel and a celebration of JP's life will be held at Cornerstone Church of Caney on Monday, March 11th at 11:00 AM. JP was born on January 13, 1939 in Curtis, OK to Roy and Helen (Butler) Clark. He attended Curtis schools and graduated from Mooreland High School in 1957. On October 9, 1960, JP married Patsy Smith. From this union, JP and Patsy welcomed 4 children, Randy, Marlin, Kevin, and Brenda. While in Mooreland, OK, JP owned and operated P and C Conoco and later began work at City Service. In 1968, Patsy and JP moved to Caney after a transfer within City Service. JP worked at City Service later known as Williams Natural Gas and Southern Star for 33 years. During these 33 years, JP served as a welder, known by many as the best they had and in 1979, he became a pipeline inspector and traveled to several states. JP loved hunting, fishing, welding and most of all spending time with his family. He was an active member in the community. He was a member of the VFW, American Legion, volunteer fire department, Niotaze city council, and Niotaze water department. JP helped with many welding projects at the Rec baseball fields and various other welding projects around the community. He is preceded in death by his parents, Roy and Helen Clark, granddaughter, April Clark, niece, Terrie Lynn Snell, nephew, Mark and wife Ladonna Clark, in-laws, Babe and Dorothy Smith and sister in-law, Leona Smith. Those left to cherish JP's memory include; wife Patsy of Niotaze, KS, sons, Randy and wife Leslie Clark of Seadrift, TX, Marlin and wife Shyanna Clark of Mooreland, OK, Kevin and wife Shantayle Clark of Amarillo, TX, daughter, Brenda and husband Derek Spencer of Niotaze, KS, brothers, Pat and wife Verlaine Clark, Mike and wife Janet Clark, Terry and wife Rita Clark, 19 grandchildren and 19 great grandchildren. Memorials can be made in JP's name to the COPD Foundation and St. Judes Children's Research Hospital and may be left with Potts Chapel. To leave the family a special message of condolence please visit www.pottsfuneralhome.com.

The family of Jay Preston Clark created this Life Tributes page to make it easy to share your memories.

Send flowers to the Clark family.