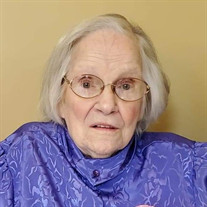 Jean Julia Clark, 90, of Bartlesville, Oklahoma, went to be with her Lord and Savior on March 19, 2020. Jean was born half an hour after her twin sister Joan in Philadelphia, Pennsylvania, on February 6, 1930. She married in 1949, and since Don was in the Navy they moved a few times in the USA, ending up in Minnesota in the mid-1950s. She moved to Bartlesville in June 2001, after her granddaughter Beth graduated high school. She loved it in Oklahoma and lived in her house until 2011 when she moved in town to Tallgrass Estates. She left many friends behind at Tallgrass when she needed to move to Heritage Villa Nursing Home in October of 2018, where she also left behind friends. She was a retired bus driver for Rehbein Transit in Lino Lakes, MN, and also volunteered at Unity Hospital in MN and the Jane Phillips in Bartlesville. She was a crossing guard for a couple of years in Bartlesville as well and she loved the kids. Jean is survived by her daughter Melody Clark McArdle of Cotter, AR, daughter in law Darlene Wedington-Clark of Phoenix, son in law Kent Goolsbay of San Antonio and son Don Wedington-Clark of Phoenix, her brother Dave Elliott (Cindy) as well as 12 grandchildren, 8 great grandchildren and 5 great great grandchildren, and numerous extended family spread all over the country and world. She is predeceased by her husband of almost 46 years Don Clark, her swin Sister Joan Beard, her parents Albert & Olive Elliott, two daughters Sharon Wolff and Joye Goolsbay, and two great grandsons Justin & Corey, as well as numerous other family. In lieu of flowers, the family requests memorials be donated to The Journey Home, Bartlesville, OK, or American Diabetes Association, 2451 Crystal Drive, Suite 900, Arlington, VA 22202. No formal services are planned at this time. Services are under the direction of Carter Davis and the Davis Family Funeral Home – Walker Brown Chapel. Online condolences and remembrances may be shared at www.DavisFamilyFuneralHome.com.

Jean Julia Clark, 90, of Bartlesville, Oklahoma, went to be with her Lord and Savior on March 19, 2020. Jean was born half an hour after her twin sister Joan in Philadelphia, Pennsylvania, on February 6, 1930. She married in 1949, and since... View Obituary & Service Information

The family of Jean Julia Clark created this Life Tributes page to make it easy to share your memories.

Jean Julia Clark, 90, of Bartlesville, Oklahoma, went to be with...

Send flowers to the Clark family.