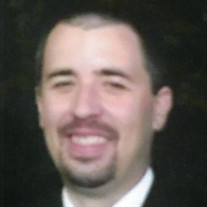 Jeffrey Lee “Jeff” Ellington, 49, passed away on Tuesday, August 25, 2020, at home surrounded by his loving family and under the care of Seasons Hospice in Tulsa, Oklahoma. Jeff was born on September 12, 1970 in Bartlesville, Oklahoma. Jeff lived in the Dewey, Tulsa, Catoosa, and Claremore, Oklahoma area until moving to Detroit, Michigan in 1992. Jeff attended Accelerated Christian Education (ACE) at the Church of the Nazarene in Claremore through 8th grade. Jeff graduated from Claremore High School in 1989. Jeff attended Oklahoma State University (1990-1991) in Stillwater and Wayne State University (1992-1996) where he was a member of Pi Kappa Alpha Fraternity. During his time in Detroit, his many friends nicknamed him “Oakie.” Jeff’s family called him their “job hustler” as he was never without one or two full- or part-time jobs since the age of 14. Jeff’s career began in 1985 stocking shelves in a local convenience store in Claremore after school. After moving to Detroit, Jeff worked at Wayne State University, College of Education as a student assistant, with his friend Jamie Slusher, as an independent disc jockey (DJ) at weddings, receptions, and night clubs, as well as a truck loader at Faygo Beverages, and as a valet at various restaurants, event halls, and night clubs. Moving back to Oklahoma in 2000, Jeff continued his career working as an auto detailer and parts salesman at Doenges Ford, Bartlesville; Jim Norton Chevrolet, Tulsa; and at several LKQ, Inc. parts and salvage locations until his death. During the summers (1981-1986), Jeff served as a volunteer staff member at Northeastern State University, Special Education Department’s Camps for Exceptional Children and Adults that were located on the shores of Fort Gibson Lake, Oklahoma. Jeff and Sandra Kay (Kasey) Alford were married on October 9, 2004, at Mt. Olive Baptist Church, Nowata, Oklahoma. They established their home in Tulsa where they lived until his death. Jeff and Kasey enjoyed planning and taking their annual anniversary getaways including trips to the Oklahoma panhandle and a cruise of Mexico and the Jamaican islands. Some of Jeff’s greatest joys in life was being called “Papa”, watching sports, going to horse races, playing cards, and eating out with Kasey. Jeff leaves behind to cherish his memory his wife Kasey of the home; his mother, Dr. Daisy B. Ellington Dupas and stepfather Augustine W. Dupas, Jr., Detroit, Michigan; his father Eddie Dee Ellington and stepmother Lottie Ellington, Claremore; maternal grandmother Betty Watkins, Dewey; brothers-in-law Eddie Alford, Nowata, and Jamal Hubbard, Tulsa; stepsisters Charlotte Lamberson and Lisa Hughes, both of Claremore; his stepchildren Le Quisha (Nikki), Charles (Stank) Alford, both of Tulsa; and step-grandchildren Brayden, Deviyon and Kyandra, all of Tulsa, and Tyrone, Grand Prairie, Texas, and Khaliyah, Nowata., as well as a host of extended family members and friends. Jeff was preceded in death by his step-granddaughter Audrey Alford, mother-in-law Mary Alford, maternal grandfather William L, Watkins, and paternal grandparents Purdom Henry and Irene Ellington. Visitation will be held on Monday from 10-8 and Tuesday 9-12 at the Davis Family Funeral Home – Dewey Chapel, 918-534-3030, 113 S. Osage, Dewey, OK. Funeral services will be held 2 p.m. on Tuesday, at the Northpoint Assembly of God in Dewey. Interment will follow in the Dewey Cemetery. Services are under the direction of Carter Davis and the Davis Family Funeral Home – Dewey Chapel. Online condolences and remembrances may be shared at www.DavisFamilyFuneralHome.com.

Jeffrey Lee &#8220;Jeff&#8221; Ellington, 49, passed away on Tuesday, August 25, 2020, at home surrounded by his loving family and under the care of Seasons Hospice in Tulsa, Oklahoma. Jeff was born on September 12, 1970 in Bartlesville, Oklahoma.... View Obituary & Service Information

The family of Jeffrey Lee Ellington created this Life Tributes page to make it easy to share your memories.

Send flowers to the Ellington family.