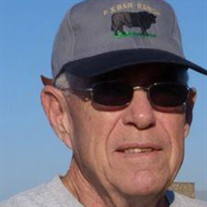 Jeffrey Burton “Jeff” Freeland, 77, of Copan, OK died Wednesday, November 11 at his home in rural Copan. He was born November 4, 1943 in Garden City, KS. The younger son of Arthur E. and Dorothy Mae (Rewerts) Freeland, he lived in Leoti, KS until his father settled in Bartlesville in 1953. After graduating from College High in 1961, he attended Oklahoma University. In December of 1963 Jeff married Martha “Sudi” DeShazo. He graduated from OU in 1965 with a double major in Anthropology and Linguistics. While at OU he was employed by the Stovall Museum and served as an Exhibit Specialist for the Osage Tribal Museum renovation under a University grant. The couple moved to Lexington, Kentucky, where he attended The University of Kentucky, earning his MA in Anthropology and serving as a research anthropologist at the Federal Narcotics Hospital Clinical Research Center. After the closing of the Hospital, Jeff decided to “drift west” rather than accept job offers in larger metropolitan areas. They returned to Oklahoma in 1972 and Jeff agreed to postpone farrier's school to start the Tulsa Drug Treatment Center as Coordinator. While in Tulsa, Jeff and Sudi opened the Collector's Eye at The Market Place specializing in Native American jewelry. Jeff completed his farrier’s certification at Sperry, OK. He and Sudi moved to Copan in 1976 where he worked shoeing horses and wholesaling jewelry in a multi-state area for Sudi's brothers. In 1979 he accepted a position as a Corrosion specialist and Crew Chief at KADLEC Associates. Four years later he joined Sudi as Co-Manager of Boulevard Homecare Center in Bartlesville. In that capacity he was one of the first Certified Rehabilitation Technology Specialists (CRTS) in the country. After retiring from Boulevard he worked as a facilities surveyor for the Accreditation Commission for Health Care (ACHC). He published articles in a number of scholarly journals, including the “Journal of Psychiatry,” “International Journal of Addictions” and “Journal of the Royal Agricultural Society of England”. His article “Patterns of Drug Use” was cited repeatedly and used in a study by the U.S. Army during the Carter Administration. Jeff was a member of the Bartlesville Sportsmen's Club and was a regular at the range, skeet shooting with his friends. He was a voracious reader. He attended Town & Country Christian Church and Bartlesville First Wesleyan. All of which still left him sufficient time to be the favorite uncle of a number of nieces and nephews. He was unwavering in his respectful devotion to Sudi. Through an impressive variety of pursuits and employments, Jeff Freeland was, in the truest sense, a philosopher. His intelligence and curiosity were engaged in observing people and behaviors. His search for mastery of each new field and skill inevitably led him to larger questions. He appreciated the ways humans adapt and change. Practical applications of what he learned were shared with dry wit and sharp irony. In conversations, friends and listeners found themselves considering fresh perspectives, then noticing his challenging grin. Jeff Freeland was preceded in death by his parents, two stepmothers – Leona Morrison and Bea Shull – a stepsister, Kathleen (Morrison) Niklas, and a cousin, C.B. Harris. He is survived by his wife Sudi of the home, his brother Arthur Michael Freeland and wife Mary of Tulsa, brother-in-law Don DeShazo and Margaret of Dewey, sister-in-law Nona Pebworth of Springdale, AR and cousins, Cathy (Harris) Johnson of Westminster, CO and Sara (Harris) Sack of Parsons, KS. Arrangements for cremation have been made with Davis Family Funeral Home. The family will hold a Celebration of Life service to be announced at a later date when it is safer to travel and meet in groups. Memorials may be made to The Journey Home in Bartlesville or the charity of your choice. Online condolences and remembrances may be shared at www.DavisFamilyFuneralHome.com.

The family of Jeffrey Burton Freeland created this Life Tributes page to make it easy to share your memories.

Send flowers to the Freeland family.