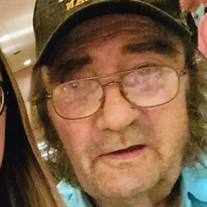 Jerry Ray Alexander, 71, Vietnam War veteran and past VFW Commander of Bartlesville and Dewey posts, died Saturday in Bartlesville. He had fought the good fight, served his country and fellow citizens honorably, and kept his family and friends close to his heart. Jerry was born the son of Orace M. and Hazel Clarina (MacMaster) Alexander on September 2, 1949, in Bartlesville. He was raised in Dewey and had fond memories of his childhood, recalling being part of the annual Pioneer Day Parade in his family’s covered wagon pulled by their mules Mopsy and Doc. Jerry learned to drive out of necessity at age 7, when he would take the wheel of his father’s truck to transport family around town. He started working at a young age after his father passed away, and at age 18, Jerry entered the U.S. Army as a heavy equipment operator, before transferring to the motor pool where he trained as a mechanic. While home on leave the young soldier was set up on a blind date with Sue Brewer, Right from the get-go, Jerry knew she was the one and they quickly married on November 25, 1969. Over the years Jerry had many jobs being a jack of all trades, from driving trucks and operating all sorts of rock crushers and sand trucks to working as a mechanic, and even serving as a police officer. Working all over the Sooner state, including Nowata, Maysville, Copan and Collinsville, Jerry faithfully provided for his family. After years on the go, Jerry and Sue retired from over the road trucking as co-drivers and still best friends - of course Sue was the lead driver and Jerry, the relief driver. Jerry deeply loved his country. He served during the Vietnam War and back home was Commander for the H.E. Bailey Veterans of Foreign Wars (VFW) Post 989 in Bartlesville for five years before taking over as Commander of the Dewey VFW Post 10099 from 2008 until 2020. Over the years, Jerry volunteered countless hours, along with Sue who was active in the VFW Auxiliary, to help rehabilitate his fellow veterans, care for military families and serve his community. Jerry loved the Lord and even though in later years his eyesight failed, he loved to sing along with the praise and worship TV channel he tuned into. Both Sue and Jerry liked to compete in Turkey Shoots, and while Sue was quick to point out who was the better shot, Jerry was slow to prove her wrong. Mostly they stayed busy, raising their children and a whole host of grandchildren, friends and foster children throughout their 51-year marriage. Papa loved his many grandchildren and precious time spent with them. Everyone who knew Jerry loved his sense of humor, his many jokes and appreciated his friendship. Even though he could be hot headed, Sue always leveled him out and they made a great duo. Jerry also dearly loved his fur babies Ginger and Zoey. Jerry is survived by his wife Sue of the home; eight children Jerry Alexander Jr. and Helen, Ron Alexander, Stacey Alexander and Kenny Ramey, Tina Martinez and Brittani, Desaray Gillham, Kimberly Meyer and DJ, Cherokee Adams and Hunter, Jerry Kelley Jr and Kristin; 32 grandchildren; and numerous great grandchildren and foster children. Jerry is preceded in death by his parents; brothers Ronnie, Larry and Gary; and sister Clarrissa Mary Jane Gray. Jerry’s family will receive friends at the Davis Family Funeral Home – Dewey Chapel, 918-534-3030, 113 S. Osage (Hwy. 75), Dewey, on Thursday, from 6-8 p.m. Visitation will also be held on Thursday from 10-8 and Friday 9-1. Funeral services will be held 2 p.m. on Friday, at the Davis Family Funeral Home - Dewey Chapel, with Rev. Waymond White officiating. Interment will follow in the Dewey Cemetery with military honors. Services are under the direction of Carter Davis and the Davis Family Funeral Home – Dewey Chapel. Online condolences and remembrances may be shared at www.DavisFamilyFuneralHome.com.

Jerry Ray Alexander, 71, Vietnam War veteran and past VFW Commander of Bartlesville and Dewey posts, died Saturday in Bartlesville. He had fought the good fight, served his country and fellow citizens honorably, and kept his family and friends... View Obituary & Service Information

The family of Jerry Ray Alexander created this Life Tributes page to make it easy to share your memories.