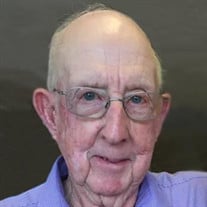 Jerry Ray Cantrell of Bartlesville was 85 years young when he went home to his Heavenly Father. He will be missed by many, but especially by his wife, sons, grandchildren, and the Lord’s most recent blessing, his great granddaughter. Jerry was born the son of Felix David and Lola Mae (Ditmore) Cantrell on June 26, 1935, at the family farm in Hydro, in western Oklahoma. Jerry lived and worked his entire life on the family farm until retiring and moving to Lawton in 2012, and then to Bartlesville in 2016. Jerry liked to tell the story of using the wheat truck as his ride to high school. Can you imagine the sight? Jerry would stop and pick up his friends on the way to school and have a wheat truck load of friends in the bed of the truck. Jerry graduated from Hydro High School in 1953 and continued to work on the farm with his parents. They raised mostly wheat and occasionally grew cotton and soybean. Jerry raised registered Angus Cattle as well as countless other farm animals over the years. His son Stan carries on the family tradition and continues to run the family farm. Jerry found his soulmate in Jean (Biggs) Raetz. Although they knew each other during their younger years the Lord reconnected them later and they enjoyed 50 years of loving marriage. Side by side Jerry and Jean worked the farm with Jerry taking occasional fishing trips with the boys for fun. Fishing was one of his favorite things to do, but often the farm work cut into the opportunities for recreation. After they married, Jerry and Jean attended the First Baptist Church of Hydro faithfully for many years. Jean played the piano and organ, and Jerry was active in the ministries of the church. They raised their children in the church and left them with an amazing heritage of loving the Lord with all their heart and soul. Locally Jerry and Jean attended Abiding Place, pastored by their son David, and Happy Hill church. More than anything, Jerry loved his family and his Lord and Savior Jesus Christ. Jerry will be dearly missed on earth but he will be rejoicing for eternity. Jerry is survived by his loving wife Jean; two sons, Stan (Mary) Raetz, and David Cantrell; five grandchildren, Logan Sullivan, Hailey (Austin) Cantrell, Buddy Raetz, Laci Cantrell and Alyssa Cantrell; and one precious great granddaughter Parker. He is preceded in death by his parents and one daughter Pamela Sue Sullivan. Funeral services will be held 2 p.m. on Saturday, at Abiding Place Ministries, 616 E 4th Street, Bartlesville, OK 74003, with Pastor David Cantrell officiating. Services are under the direction of Carter Davis and the Davis Family Funeral Home & Crematory – Walker Brown Chapel. Online condolences and remembrances may be shared at www.DavisFamilyFuneralHome.com.

Jerry Ray Cantrell of Bartlesville was 85 years young when he went home to his Heavenly Father. He will be missed by many, but especially by his wife, sons, grandchildren, and the Lord&#8217;s most recent blessing, his great granddaughter. Jerry... View Obituary & Service Information

The family of Jerry Ray Cantrell created this Life Tributes page to make it easy to share your memories.

Jerry Ray Cantrell of Bartlesville was 85 years young when he...

Send flowers to the Cantrell family.