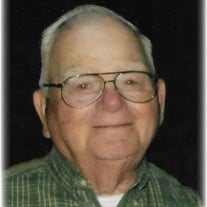 Jerry Henshall, 83, of rural Bartlesville, died Monday morning from complications with congestive heart failure. Jerry was born the son of Clint Edward and Madelyn (Irvine) Henshall on June 7, 1935, in Bartlesville. He was raised in the Bartlesville and Ochelata areas, attending local schools and playing football for the Col-Hi Wildcats, and graduating in 1954. He went on to play college ball before joining the U.S. Navy, serving from 1956 to 1959 on Essex-class aircraft carrier USS Kearsarge as an Air Control man and a year aboard a submarine. Once honorably discharged, Jerry landed in California as an air traffic controller before returning to Bartlesville. After a short stint with the Bartlesville Police Department, he began a career as an iron worker with the Iron Workers Local Union 584. During this time Jerry met and married Margaret and they enjoyed 30-plus years of marriage until she preceded him in death in 2005. In 1985 he began a career with the Washington County Sheriff’s Office retiring with the rank of Sergeant in 1998. He continued his involvement as a Washington County Reserve Deputy working transports and patrol in the south end of the county. Following the deaths of their spouses, Jerry and Frankie DeLapp, longtime neighbors and good friends, decided to unite in marriage on March 17, 2006, in Bartlesville. They were further blessed with almost 13 years of loving marriage. Jerry had many passions in life - from a young age he pursued skydiving and successfully attempted 1,300 free falls over the years. He loved the outdoors; hunting, camping and fishing with his friends and family on his boat. Jerry and Frankie were longtime Oklahoma University football season ticket holders, often riding their OU themed Goldwing trike no matter how cold the weather. They did everything together and cherished their time together. Jerry was a member of the Ramona Masonic Lodge #326 and the Bartlesville Masonic Lodge #284, serving as Worshipful Master of the Ramona lodge in 2017. Jerry loved the Lord and reconfirmed his salvation by being baptized at the age of 77 at his home church, First Baptist Church in Ramona. Jerry is survived by his wife Frankie of the home; one son Jerry Henshall and Stacy of Norman; three daughters: Rosalie DeLeonardis, Maryann Heredia and Maryjane Colombini, all of California; step children Curtis DeLapp and Lee Anne of Bartlesville, and Kristi DeLapp and Troy Calhoon of Bartlesville; as well as his siblings, Gordon and Deanna Latta of St Joseph, MO, Dr. Mike and Donna (Henshall) Anderson of Yukon, OK, Butch and Linda Henshall of Bartlesville, and Penny B. Adams of St. Joseph, MO; grandchildren Matt Henshall, Bryce Henshall, Tanner and Clarissa DeLapp, Chandler DeLapp, Anna Kate DeLapp and Brandi DeLapp all of Oklahoma; and a host of other family and friends. He was preceded in death by his parents; two brothers Bill Eugene Evans and William Edward Henshall; and one sister Barbara Ann Pendergraft. Visitation will be held on Thursday from 9-8 and Friday 9-11 at the Davis Family Funeral Home – Walker Brown Chapel at 4201 Nowata Road, Bartlesville, OK. In lieu of flowers, memorial donations may be made to the Ramona Masonic Lodge #326, PO Box 202, Ramona, OK 74061. Funeral services will be held 2 p.m. Friday, Feb. 1, at the First Baptist Church of Ramona, with Pastor Kevin Baker officiating. Services are under the direction of Carter Davis and the Davis Family Funeral Home – Walker Brown Chapel. Online condolences and remembrances may be shared at www.DavisFamilyFuneralHome.com.

Jerry Henshall, 83, of rural Bartlesville, died Monday morning from complications with congestive heart failure. Jerry was born the son of Clint Edward and Madelyn (Irvine) Henshall on June 7, 1935, in Bartlesville. He was raised in the Bartlesville... View Obituary & Service Information

The family of Jerry Henshall created this Life Tributes page to make it easy to share your memories.