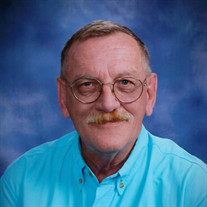 Jerry Wayne Smasal, 71, of Bartlesville area, passed away on March 22, 2020. He was born November 8, 1948 to William Smasal (Pat) and Mildred Faye Estes Smasal (Millie). His brother is Jean Smasal of Frisco, Texas. Jerry was born and raised in the Bartlesville area. He attended St. John’s Catholic School, then on to College High. As a kid he worked mowing lawns, worked in Durrells Feed Store and later worked for Cities Service as student summer help. He went to NEO and then to Oklahoma State University. After graduation he and his wife, the former Rebecca Marsh (deceased November 1992) were off on an adventure of teaching school in New Mexico on the Zuni Indian Reservation. They later moved to Attica, KS, Bethany, OK, and a school in Oklahoma City. By this time, their family had increased with three sons. Jerry gave up teaching to go to work for the Cities Service Gas Company. He worked there for nearly thirty years. He retired in August 2006. Jerry always said he wasn’t afraid of dying, he just didn’t want to leave his wife and family. Sadly, he leaves his wife as of April 28, 1996, Carol L. McLain Smasal of the home; first son, David Smasal and wife Johna, children Jackson and Parker of Tulsa; second son, Michael Smasal and wife Kelly, children Seth, Ethan, and Paige of Baldwin City, KS; third son, James Smasal of Midland, TX; and fourth son, Ben Smasal and wife Codi, children, Kailey Austin, Patrick and Madison Sue of Bartlesville, OK. He also leaves behind 3 stepchildren, Michael McLain and wife Teresa, Leia McLain and Amber McLain-Burgess. There are eleven step grandchildren and 18 step great-grandchildren and best friends Russell and Visa Latham and numerous other friends and relatives. He will be greatly missed. No services are planned at this time. Arrangements are under the direction of Carter Davis and the Davis Family Funeral Home – Dewey Chapel. Online condolences and remembrances may be shared at www.DavisFamilyFuneralHome.com.

The family of Jerry Wayne Smasal created this Life Tributes page to make it easy to share your memories.

Jerry Wayne Smasal, 71, of Bartlesville area, passed away on...

Send flowers to the Smasal family.