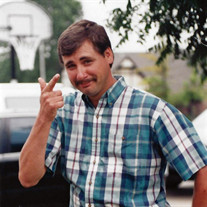 Jim Bob Askew, 58, lifelong Ochelata resident, died Thursday in Bartlesville, OK, where he was born. He is now dancing in Heaven with Jesus but will be sorely missed on earth. Jim Bob was born the son of Johnny Lee and Lettsie Ann (Ennis) Askew on April 1, 1963. He was raised on the family farm in Ochelata, and school was purely a good time to hang out with friends. He graduated from Caney Valley with the Class of 1982. From a young age, Jim Bob nurtured a passion for hunting. Jim Bob fondly remembered family hunting trips to the Kiamichi Mountains in Southeast Oklahoma where the picturesque scenery was capped by soaring elevations. His parents instilled a strong work ethic in him, and he worked for his parents at Roho Feed and Supply for many years, even after it transitioned to new ownership. One fine day, Jim Bob noticed he had a pretty new neighbor, and when he went over to introduce himself, he fell head over heels in love with Rhonda Charlene Morrison. From that day on, Rhonda remembers Jim Bob was over every morning and after work trying to spend time with her. They united in marriage on April 21, 1984, at her parents’ home. Jim Bob and Rhonda made their home in Ochelata where they raised two daughters, Miranda and Jordi. Jim Bob first went to work at a Phillips Service Station before transitioning to the mail room and then the Research Center for the next 35 years. finalized his career at Chevron Phillips Chemical Co. as a Senior Chemical Technician. Throughout this time, Jim Bob also maintained his second and third jobs which was working as an independent oil field pumper for 34 years, and raising cattle and baling hay. Jim Bob loved the Lord and was active as a Deacon at Ochelata Baptist Church. He was instrumental in church expansion, particularly the new sanctuary and Family Life Center. Friday nights were for eating tacos at Senor Salsa, oftentimes with friends and family, but especially his sweetheart Rhonda. Hunting was his time away, usually for deer, turkey or elk in Colorado. Jim Bob was especially looking forward to an upcoming hunting trip for mountain lions in Utah with the boys, JR and Jaron. Rhonda and Jim Bob also found time to travel, visit parks and enjoy trips all over, including a memorable trip to Alaska. They made time to make precious moments that cannot be replicated and memories that live on in the hearts and lives that Jim Bob touched. More than anything else on earth, Jim Bob loved his family. The grandkids did things with Papa such as feeding the cattle and pumping leases. He could often be found with a sweet smile on his face and a grandchild in his arms. He was never too tired to hug and spoil them. Most of the time when you saw Jim Bob you also saw his partner in crime, Casey Lewis. Jim Bob is survived by his loving wife of 37 years Rhonda; two daughters Miranda Prather and JR, and Jordi Leach and Jaron; mother in law Sharon Morrison Baecker and Ron; brother Michael Askew and Linda; sister Sandra Grimm and Peter; and five beautiful grandchildren, Coatney, Duke, Cora, Ronnie and Bane. He will also be missed by a host of cousins, in-laws, extended family, church family, childhood buddies, colleagues and friends. He is preceded in death by his parents. Jim Bob’s family will receive friends at the Davis Family Funeral Home & Crematory – Walker Brown Chapel, 918-333-7665, 4201 Nowata Rd, Bartlesville, on Tuesday, from 6-8 p.m. Visitation will also be held on Tuesday from 10-8. In lieu of flowers, memorials may be made to the Ochelata Baptist Church Building Fund, PO Box 290, Ochelata, OK 74051. Funeral services will be held 10 a.m. on Wednesday, at the Ochelata Baptist Church. Interment will follow in the Ochelata Cemetery. Services are under the direction of Carter Davis and the Davis Family Funeral Home & Crematory – Walker Brown Chapel. Online condolences and remembrances may be shared at www.DavisFamilyFuneralHome.com.

Jim Bob Askew, 58, lifelong Ochelata resident, died Thursday in Bartlesville, OK, where he was born. He is now dancing in Heaven with Jesus but will be sorely missed on earth. Jim Bob was born the son of Johnny Lee and Lettsie Ann (Ennis) Askew... View Obituary & Service Information

The family of Jim Bob Askew created this Life Tributes page to make it easy to share your memories.

Send flowers to the Askew family.