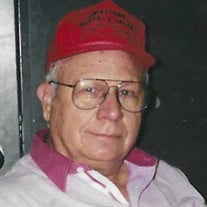 Jimmie Quillin, 90, of Bartlesville, died Monday in Bartlesville. Jimmie was born the son of Claude and Eva (Adams) Quillin on December 15, 1929 in Wynona, OK. Jimmie graduated high school at Wynona High School in 1949. Shortly after high school, he married the love of his life Joann (Frakes) Quillin on November 4, 1950. They would have celebrated their 70th anniversary next month. Jimmie joined the United States Armed Forces where he fought in the Korean War and earned the Bronze Service Star. While in the military, he was a motor tech repairing tanks and other armored combat vehicles. He would later be honorable discharged with the rank of Corporal and would join the VFW and the American Legion in his hometown. In Jimmie’s later years he would grow fond of hunting, fishing and metal detecting for collecting old coins from time to time, he also found a passion to coach little league baseball as well. He would travel with his wife to Las Vegas and New Mexico for getaway trips. If Jimmie was relaxing at home, you could find him watching polka dancing or listening to some of his favorite bluegrass music. Jimmie was an excellent father to Jimmie D Quillin and taught him many life lessons throughout their relationship and would carry on his legacy for years to come. Jimmie was also attached to his grandkids and would take them to airplane shows on the weekends. Jimmie was a quiet and humble man who never had a bad word to say about anybody. His fellow co-workers at National Zinc loved being around him and appreciated the work ethic he brought to the company. Jimmie will be loved and missed by everyone who knew him. Jimmie is survived by his wife Joann Quillin, son Jimmie D Quillin & LaNette, granddaughter Jayme Quillin and friend Stephen Nelson, grandson Jeremy Quillin, niece Carol Deboe, nephew Carl Jean Quillin, and a host of many cousins, friends, and loved ones. He is preceded in death by his parents, sister Marie Quillin, and two brothers Carl and Kenneth Quillin. Jim’s visitation will be from 10-8pm Thursday with a Family & Friends Gathering from 6-8pm at the Davis Family Funeral Home & Crematory – Walker Brown Chapel. Funeral services will be held at 11am on Friday, at the Davis Family Funeral Home & Crematory – Walker Brown Chapel, 4201 E. Nowata Rd., Bartlesville. Interment will follow at the Fairview - Talala Cemetery in Talala, OK. Services are under the direction of Carter Davis and the Davis Family Funeral Home – Walker Brown Chapel. Online condolences and remembrances may be shared at www.DavisFamilyFuneralHome.com.

The family of Jimmie Franklin Quillin created this Life Tributes page to make it easy to share your memories.

Send flowers to the Quillin family.