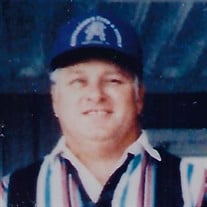 Jimmy Segal Lawrence, 69, of Dewey, died Wednesday, September 11, 2019, in Dewey. He was a loving husband, father, grandfather, and faithful friend and brother to those he worked alongside. Jimmy, or Jim as he was known, was born the son of Jimmy Segal and Bonnie Jean (Searle) Lawrence on December 17, 1949, in Bartlesville, OK. Jim developed his passion for horses and rodeo at a young age, rodeoing with his father and then becoming a professional cowboy until the age of 27. Jim graduated from College High School in 1966 and furthered his education at Northeastern Oklahoma A&M College in Miami, OK. At the age of 14, Jim first met Linda Shawver at the Bartlesville Round Up Club. Then, years later they reconnected and were united in marriage on February 27, 1991. Jim joined the Bartlesville Fire Department and served 27 years protecting the public mostly based at Station #3 on the west side. The men and women he served with were like family and Jim dearly loved his job and calling. Jim’s true passion in life was Quarter Horses, Together Jim and Linda farmed, raised cattle and bred hundreds of horses. Jim started, broke and finished hundreds of horses and was known by many for his mastery of that art. Jim loved to volunteer his time and over the years served as auctioneer at many charity auctions, raising thousands of dollars for various nonprofits and community organizations. He was active in the Masonic Lodge and was a 32nd Degree Master Mason. Talking rodeo and horses was what he loved to do and coupled with his dry sense of humor Jim was fun to be around. He was known and loved by many, and his light will be dearly missed. Jim is survived by his loving wife of 27 years Linda, daughter Jamie Felix, stepdaughter Sara O’Dell, six grandchildren, and special friends Tony Pierce, Melvin Monday, John Banks and Rocky Banks. He is preceded in death by his parents and sister Jane Gordon. No formal services are planned. Arrangements are under the direction of Carter Davis and the Davis Family Funeral Home. Online condolences and remembrances may be shared at www.DavisFamilyFuneralHome.com

Jimmy Segal Lawrence, 69, of Dewey, died Wednesday, September 11, 2019, in Dewey. He was a loving husband, father, grandfather, and faithful friend and brother to those he worked alongside. Jimmy, or Jim as he was known, was born the son of... View Obituary & Service Information

The family of Jimmy Segal Lawrence created this Life Tributes page to make it easy to share your memories.

Send flowers to the Lawrence family.