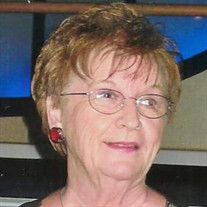 Jo Ann Robinson, longtime Wann resident, was 88 when she died on Friday, April 2, 2021, in Owasso, OK. Jo Ann was born on March 3, 1933, in Dewey, OK. She was raised west of Dewey and graduated from Dewey High School in 1951. One day while at the local drug store Jo Ann met Bill Robinson and they hit it off in a heartbeat. Before long, they were united in marriage on December 24, 1950. Bill was in the service and Jo Ann joined him in Wichita Falls, Texas, where he was stationed. Once honorably discharged they moved to the family farm in Wann where she lived for more than 47 years. Bill was transferred to Anchorage, Alaska, for three years, and then to Norway for six months - it was quite the experience for the family, Barbara had just married and stayed behind, and Melinda decided to make her home in Alaska where she lived for many years, and the boys Billy and Lanny returned to the farm with mom and dad. Jo Ann was a devoted, loving mother who stayed and worked from home and she enjoyed being active in her children’s many school activities. She was also active in the Wann Sundowners Club for many years. During the harvest Jo Ann not only drove heavy equipment, she prepared the noon lunch for the men working in the field. The men really appreciated her down home cooking and looked forward to it every day. Jo Ann loved her grandkids, having them over to the house all the time and enjoying running them around to their activities. Later in life, she enjoyed taking cruises with her daughters and making trips to Alaska to visit Melinda. She loved playing 2 card at the family gatherings and she would get so excited when she won money. Jo Ann was always ready to have fun and loved visiting with family and friends. Jo Ann is survived by her three children Barbara Ann Mackie of Fayetteville, NC, Melinda Kay Robinson of Collinsville, and Lanny Ross Robinson (Pam) of Wann; six grandchildren, Patrick Mitchell (Angela), Lindsay Tate (Danny), Travis Robinson, Kyle Robinson (Adrianne), Calli Robinson (Rambo), and Emily Robinson (Clara); 11 great-grandchildren Autumn, Blake, Macayla (Austin), Seth, Bobby, Landyn, Kyleigh, Adelynn, Michael, Shailee, and Garrett; and three great-great grandchildren Kazdyn, Ezriah, and Eylee. She is preceded in death by her husband Billy Ross Robinson, mother Flossie Johnson, and son Billy Wayne Robinson. Jo Ann’s family will receive friends at the Davis Family Funeral Home – Dewey Chapel, 918-534-3030, 113 S. Osage (Hwy. 75), Dewey, on Thursday, April 8, from 6-8 p.m. Visitation will also be held on Thursday from 12-8 and Friday 10-1. In lieu of flowers memorials may be made to The Journey Home, 900 NE Washington Blvd., Bartlesville, OK 74006. Funeral services will be held 2 p.m. on Friday, April 9, at the Davis Family Funeral Home - Dewey Chapel. Interment will follow in the Dewey Cemetery. Services are under the direction of Carter Davis and the Davis Family Funeral Home – Dewey Chapel. Online condolences and remembrances may be shared at www.DavisFamilyFuneralHome.com.

Jo Ann Robinson, longtime Wann resident, was 88 when she died on Friday, April 2, 2021, in Owasso, OK. Jo Ann was born on March 3, 1933, in Dewey, OK. She was raised west of Dewey and graduated from Dewey High School in 1951. One day while... View Obituary & Service Information

The family of Jo Ann Robinson created this Life Tributes page to make it easy to share your memories.

Jo Ann Robinson, longtime Wann resident, was 88 when she died...