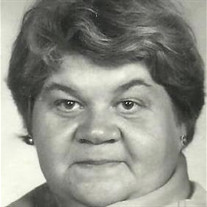 Jo Ellen (Sears) Basler, 82, died Thursday evening, September 24, 2015, a little before midnight at her home in Bartlesville, Oklahoma. She was born August 8, 1933, to Iva Violet (Binning) Sears and Joseph Hardin Sears in Tuxedo, a rural community that is now part of Bartlesville, Oklahoma. Jo Ellen was a member of several area pioneer families, including the Sears, Bennett and Ringo families, and she grew up spending lots of time on her grandparents’ farm on the Caney River south of Bartlesville. She rode horses from an early age and rode in the grand entry of the famed Dewey Roundup from about the age of 8 every year until it ended. In her later years it became one of her great pleasures to follow horse groups online and tell stories about the wonderful horses she had known and loved. When Jo Ellen graduated from Northeastern State University in Tahlequah and began to teach at Bartlesville’s Central Junior High School, she was believed to be the first woman industrial arts teacher in the state. She retired from teaching at Central after 19 and a half ye­ars, and loved seeing her former students around town in her retirement. She is survived by two sons, David Rain and Daniel Basler, both of Bartlesville; one daughter, Mary Jo Radosevich and her husband, Paul, of Blackey, Kentucky; 13 grandchildren, 9 great-grandchildren; two beloved great nephews, Dustin K. Sears, Sr., and his wife, Shelly, and their four children, of Placerville, California, and Robert Clapp and his wife, Erica, of Temple, Texas. One sister, Alice Snell of Bartlesville, dear friend, Theresa Dunlap, one uncle, Sam Wade Sears of Bradenton, Florida; one aunt, Theresa Sears Kennedy of Klamath Falls, Oregon, many other nieces and nephews and an enormous band of beloved cousins from both the Binning and Sears sides of her family. She was preceded in death by her parents, a brother, Duel Sears, a nephew, Doug Sears, and a long-time friend, Bill Robinson of Brooklyn, Michigan.

The family of Jo Elllen Basler created this Life Tributes page to make it easy to share your memories.

Send flowers to the Basler family.