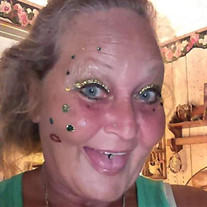 Jo Lena Dee Jordan, 59, of Dewey, died Tuesday in Dewey. Jo Lena was born the daughter of Esteban Justo and Dolores Jean (Reid) Vargas on January 8, 1963, in Oklahoma City. When Jo Lena was young, her family moved to Dewey where she was raised and educated. She was a daddy’s girl, and everyone loved her. During her school years, the dynamo excelled at all school sports, except for football because they wouldn’t let her play. Whatever she set her mind to, she did 100%. So, it’s no surprise that she was always the number one in cookie sales for her Girl Scout troop too. Jo Lena graduated from Dewey High School in 1981. Over the years she had many memorable jobs including the SPCA (she loved animals!), a heavy equipment operator working on the expansion of Highway 75 to Tulsa, and for the cable company where she received the nickname of Cable Lady for her spryness in climbing the poles. In her spare time, she loved to garden and care for her many house plants - during the winter her home was filled to the brim with all of the outdoor plants that needed a warm embrace, and frogs could be found in every room of her house. Antiques were of special interest to Jo Lena especially garden tools that she could make look new again. Oftentimes she would get a snip of a plant at the store, only to find it a new home as a new growth in her garden. As a mother she was the coolest mom and who gave the best hugs. Jo Lena was also the mother to all of her kids’ friends and they were always welcome over to the house. Her face lit up when she smiled, which was usually while spending time with family. The grandkids loved special moments with Memaw and looked forward to their extra-special sleepovers. Jo Lena always knew how to comfort others in times of need, with just a few simple words to put life’s problems into perspective. Her passing has been a shock to her big family and they dearly miss her. Jo Lena is survived by her parents Esteban “Lou” Justo and Dolores Jean (Reid) Vargas; three children Lekisha Jordan, Jessica Jordan, and Colby (Rebecca) Ramsey; three siblings Tommy Vargas, Lisa Vargas and Esteban (Tara) Vargas; nine grandchildren, Bryan Hudson, Kayleigh (Jacob Sykes) Hudson, Jaelan Jordan, Kinzee Jordan, Emma Jordan, Mason Jordan, Noah Jordan, Ezekiel Ramsey and Scarlett Ramsey; and great-grandson Creed; and two nieces Michelle Brown and Brooke Stierwalt. She is preceded in death by her son Joshua David Jordan. Jo Lena’s family will receive friends at the Davis Family Funeral Home – Dewey Chapel, 918-534-3030, 113 S. Osage (Hwy. 75), Dewey, on Sunday, from 3-5 p.m. Visitation will also be held on Sunday from 12-5 and Monday 9-12. Funeral mass will be held Monday at 2 p.m. at Our Lady of Guadalupe Catholic Church. Services are under the direction of Carter Davis and the Davis Family Funeral Home. Online condolences and remembrances may be shared with Jo Lena’s family at www.DavisFamilyFuneralHome.com.

Jo Lena Dee Jordan, 59, of Dewey, died Tuesday in Dewey. Jo Lena was born the daughter of Esteban Justo and Dolores Jean (Reid) Vargas on January 8, 1963, in Oklahoma City. When Jo Lena was young, her family moved to Dewey where she was raised... View Obituary & Service Information

The family of Jo Lena Dee Jordan created this Life Tributes page to make it easy to share your memories.

Send flowers to the Jordan family.