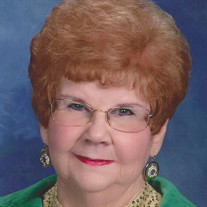 Joan Lucille Cowan, 84, of Bartlesville, died Thursday, February 18, 2021 in Bartlesville, OK. Joan was born the youngest and baby of four children of Benjamin Franklin and Vera Jo (Griffith) Stubblefield on April 21, 1936, in Denison, TX. She was raised in Bristow, OK. Her brothers were quite a bit older than Joan but she worshipped her big sis Ladean who was six years older and Joan was always a loving and adoring ‘lil sister. Ladean didn’t always feel so lucky that her younger sister was constantly ready and willing to do everything with her, such as going on Ladean’s dates and even sharing the same set of friends. When Joan was asked how she meet Doc, she referred to a Valentines note he wrote to her. “In the summer of 1945 I first saw this little nine-year-old redhead in pigtails and shorts riding a bike. She lived next door to my aunt. On this day I was sitting on the front porch of my aunt’s house and I heard a child’s voice saying “Mister”. Since I was only 12 years old, I didn’t pay any attention. Again I heard this voice, much louder: “Mister, would you fix my chain?” No one else was around so I realized that at 12 years old I was being called “Mister” so I fixed her bicycle chain back on its sprocket. She’s been pulling my chain ever since.” The saying goes that “knowing is half the battle” – in time, after Doc won Joan’s heart, they were united in marriage on March 8, 1953. Just two weeks after their wedding, Doc reported to duty with the U.S. Army. After basic training he was stationed at Ft. Bliss, Texas, where Joan joined him as a newbie military spouse and became a devoted Army wife. After Doc’s honorable discharge they returned to Bristow, then on to Wichita, KS, for six years, before settling in Santa Maria, CA, for the next 30 years, where they raised their three children who were all born five years apart. During their time in Santa Maria, Joan was very active for many years with the Nazarene Church. There, Joan worked before retiring as supervisor and Certified Surgical Technician from Marian Medical Center after 16 years of service. Joan and Doc relocated in 1994 to Grove, OK, and on to Bartlesville in 2005, where they attended the First Wesleyan Church. Joan’s passions in life were watching ice skating, social gatherings and playing board games. Joan liked to joke that once she gets to heaven she’d take up ice skating and Doc is going to receive a hand mirror and a hairbrush! Together Joan and Doc enjoyed traveling, taking cruises and several memorable trips to Hawaii. Most of all Joan was a loving mother who loved caring for her family and her home. She will be dearly missed by her family and friends. Joan is survived by her husband of 68 years Doc; three children, Deborah Ann (Ron) Butterfield, Ronald Eugene Cowan, all of Santa Maria, CA, and Robert Michael Cowan of Santa Rosa, CA; Ladean Chambers of Belaire, KS; two grandchildren, Ryan Butterfield, Brianne (Scott) Keighley; and five great grandchildren: Cole, Jordan, Scarlett, Charlie and Paige. Joan was preceded in death by her parents and two brothers, Franklin Lynn Stubblefield and Lloyd Griffith Stubblefield. Funeral services will be held 11 a.m. on Saturday, February 27, 2021, at the Davis Family Funeral Home & Crematory – Walker Brown Chapel, 918-333-7665, 4201 Nowata Rd, Bartlesville, with Pastor Dan Denison officiating. Services are under the direction of Carter Davis and the Davis Family Funeral Home & Crematory – Walker Brown Chapel. Online condolences and remembrances may be shared at www.DavisFamilyFuneralHome.com. THE FAMILY RESPECTFULLY REQUEST THAT MASKS BE WORN AT THE SERVICE.

The family of Joan Lucille Cowan created this Life Tributes page to make it easy to share your memories.

Send flowers to the Cowan family.