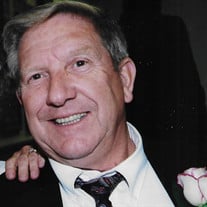 Joseph “Joe” Daniel Goolsbey, Bartlesville business owner and God’s faithful servant, died Monday in Bartlesville, after 85 years and a lifetime of industriousness and genuine grit. He lived by one rule: “You got to make it work” and he walked the talk every day. From a young age, Joe learned the value of hard work, helping his father in the family grocery and produce stand. He was born the son of Jerry and Anna Belle (Warden) Goolsbey on Sept. 15, 1934, in Bartlesville where he attended local schools. After graduating from College High in 1952, Joe moved to California where he continued to buy and sell produce. After 16 years away, Joe returned home to Bartlesville and raised hogs. He bought Louise’s Drapery which he expanded into upholstery, fabrics and carpet, later becoming Joe’s Carpet on Highway 75 in Bartlesville. Anyone who knew Joe would agree that he was all work and no play, he loved to keep busy and was always on the go. While responding to a customer concern regarding a flooring purchase Joe met the love of his life Jo Ann Kyser. After some convincing Jo Ann and Joe were united in marriage on June 8, 1997, and they enjoyed 22 years of loving marriage. Joe was raised in the Pentecostal Church and he attended church regularly throughout his life. For the past several years he was a member of Emmanuel Chapel in South Coffeyville, OK, and active in the many projects in and around the church, always being faithful to help in any way he could. Joe was continuously busy planning his next project - he was always active, never stopping and was one of a kind. Joe and his can-do spirit will be dearly missed. Joe is survived by his wife Jo Ann of the home; five children, Becky Thomas of Amarillo, TX, Tammy Goolsbey of Los Angeles, CA, Jerry Goolsbey of Copan, Jody Goolsbey of Bartlesville, and Malcolm Kyser of Montgomery, AL; three sisters, Oleta Morrison Murray of Owasso, Sylvia Thomas of Florida, and Darlene Chamber of California; and numerous grandchildren and great grandchildren. Joe is preceded in death by his parents, two sons Rick and Jeff, daughter Helen Goolsbey and one sister Rosemary Goolsbey. Joe’s family will receive friends at the Davis Family Funeral Home – Walker Brown Chapel, 918-333-7665, 4201 Nowata Rd, Bartlesville, on Friday, from 6-8 p.m. Visitation will also be held Friday from 10-8. Funeral services will be held 10 a.m. Saturday at the Davis Family Funeral Home – Walker Brown Chapel, with Pastors James Feltner and David Roman officiating. Interment will follow at the Dewey Cemetery. Services are under the direction of Carter Davis and the Davis Family Funeral Home – Walker Brown Chapel. Online condolences and remembrances may be shared at www.DavisFamilyFuneralHome.com.

Joseph &#8220;Joe&#8221; Daniel Goolsbey, Bartlesville business owner and God&#8217;s faithful servant, died Monday in Bartlesville, after 85 years and a lifetime of industriousness and genuine grit. He lived by one rule: &#8220;You got to make... View Obituary & Service Information

The family of Joe Goolsbey created this Life Tributes page to make it easy to share your memories.

Send flowers to the Goolsbey family.