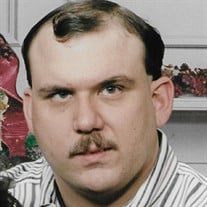 Joel Drue Wells, whose passion in life was working hard, hanging out with family and friends, and spending time with the grandbabies, died on Saturday in Barnsdall, after 45 years of life. He believed that everything had a place, which meant you should never move his tools. Joel’s place was by his wife, family and friends who loved him dearly. Joel learned the value of hard work, growing up and helping out at the family feed store. He was born the son of Allen Wayne “Buck” and Sharilyn Lee (Wisdom) Wells on June 25, 1974, in Bartlesville. He was raised in Barnsdall, played on the Barnsdall High football and basketball teams, roped and was recognized as Who’s Who in American High Schools. After graduating in 1992, he furthered his education at Alva before returning home to the family feed store, Wells Ranch Supply, in Barnsdall. He met his wife and best friend Cora L. (Gray) and they were married a year later on May 5, 2003, in Eureka Springs, AR. He worked for Wells Oil LLC as a technician in oil production for 12 years. He also had experience running fiber optic lines and travelled extensively for work. He was a loving husband and dad, good provider and faithful friend who will be missed by many. Joel is survived by his wife Cora of the home; parents Buck and Sharilyn Wells; six children, Brittany Richelle Wells, Hanna Howell, Holly Howell, Brandon Howell, Katara Kelly, and Willis Gray; one brother Thad Neal Wells and wife Wynonna Whittley; and 11 grandchildren. He also has two nephews Trace and Tanner Wells; one niece Madysen Wells; and two aunts Jeanne Brannan and Mary Lou Albert, mother-in-law Peggie Gray and brother-in-law King and wife Betty Gray. Joel also leaves behind friends he considered as brothers Scott Esky, Rick Dilley, Sammie Francis and Rod Hunt. Funeral services will be held 11 a.m. Friday at the Barnsdall Baptist Church, with Craig Seiler officiating. Services are under the direction of Carter Davis and the Davis Family Funeral Home – Walker Brown Chapel. Online condolences and remembrances may be shared at www.DavisFamilyFuneralHome.com.

Joel Drue Wells, whose passion in life was working hard, hanging out with family and friends, and spending time with the grandbabies, died on Saturday in Barnsdall, after 45 years of life. He believed that everything had a place, which meant... View Obituary & Service Information

The family of Joel Drue Wells created this Life Tributes page to make it easy to share your memories.

Send flowers to the Wells family.