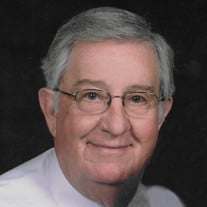 John Delbert Cowan, 83, of Bartlesville, died Tuesday in Norman. As much as he loved softball, baseball and football, John loved his family and God even more. John was born the son of Henry B. and Opal W (Syler) Cowan on Sept. 17, 1936, in Bartlesville, OK. John formed his love for sports from a young age playing softball through grade school, baseball during high school and even worked at the baseball stadium while the Bartlesville Pirates were a minor league farm team for the Pittsburgh Pirates – all this before graduating from College High in 1954 and joining the U.S. Air Force serving from 1955 to 1959. John met the love of his life Rosalie Diehl at the First Assembly of God Church at 3rd and Virginia in Bartlesville. They went together two years before uniting in marriage on June 9, 1956, while John was on leave from the Air Force. John and Rosalie made their first home in Peru, Indiana, until being reassigned to Clovis, NM. After his honorable discharge in 1959 they moved back to Bartlesville where John started his 33-year career with Phillips Petroleum Company in 1960 at the research center retiring in 1993. After 60 years of loving marriage Rosalie preceded him in death on Oct. 15, 2017. Shortly after, John moved to Norman to be closer to his two daughters Gayla and Cynthia. John loved the Lord and his church family. Over the years, he’s been a faithful volunteer, serving in the various ministries of the church including youth, Bible Quiz, Sunday school teacher, sound, and most importantly but much lesser known, mowing the church lawn for 16 years. John and Rosalie were known as encouragers who mentored many and shared laughter and God’s love with His people. John and Rosalie were enthusiastic University of Oklahoma (OU) sports fans and over the past 40 years, attended home games and many of the bowl games. Their most memorable bowl game was the Rose Bowl and Tournament of Roses Parade they attended in 2003. Boomer Sooner! All that being said, John loved playing softball, which he did his entire life – even playing two games just last week and mowing his lawn, of course. He was the past president of the Bartlesville Softball Association, past president of the Washington County Baseball and Softball Association, and served on the Bartlesville Parks Board for 12 years, Deputy State Commissioner for ASA (Amateur Softball Association) and served as State Director for 15 years, totaling 30 years with ASA. John is survived by two daughters Gayla Pickle of Norman, and Cindy Freeman and Jerry of Bethany; and three sisters Alice Norton and Delbert, Donna Smith, and Shirley Vaughn and James. He is preceded in death by his parents; wife; brother Timmothy Cowan; five sisters Uleta Cowan, Juanita Farrell, Isabel Pratt, Patricia Walker and Georgia Watkins; and one beloved grandson Alan Pickle. In lieu of flowers memorials may be made to the SpiritCHURCH All In New Campus Fund, 2121 S Madison Blvd, Bartlesville, OK 74006. Visitation to be held Thursday from 9 a.m. to 8 p.m. at Davis Family Funeral Home – Walker Brown Chapel. Services are to be held Friday, September 11, at 2 p.m. at Spirit Church in Bartlesville. Interment to follow at Memorial Park Cemetery. Services are under the direction of Carter Davis and the Davis Family Funeral Home – Walker Brown Chapel. Online condolences and remembrances may be shared at www.DavisFamilyFuneralHome.com.

John Delbert Cowan, 83, of Bartlesville, died Tuesday in Norman. As much as he loved softball, baseball and football, John loved his family and God even more. John was born the son of Henry B. and Opal W (Syler) Cowan on Sept. 17, 1936, in... View Obituary & Service Information

The family of John Delbert Cowan created this Life Tributes page to make it easy to share your memories.

Send flowers to the Cowan family.