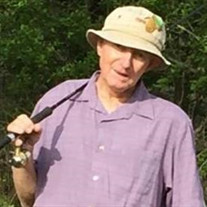 John Harley Hughey, fisherman, husband, father, and man of God, died on Wednesday October 28, 2015 at 10:15 a.m. at The Journey Home in Bartlesville, Oklahoma following a long battle with cancer. A battle that he didn’t lose, but one he overcame time and time again. J was tough. There is no arguing that. J is survived by his wife of 52 years, Elaine Susie Hughey; his son, Chris Lynn Hughey; his daughters, Eloise Marie Mason and Melissa Sue Gentry; ten grandchildren; four great grandchildren; and many close friends. Born in Liberal, Kansas to Emmit and Helen Hughey, J was a resident of Oklahoma for more than 45 years. He graduated from Guymon High School in 1962 and served in the US Army as a PFC in Ft. Leonardwood, Missouri. He was an active member at the First Baptist Church and he would be the first to tell anyone that faith and God come first, above all else. J was an avid fisherman for more than 60 years and a three-time state archery champion of the state of Kansas. He was a jack-of-all-trades and he could fix just about anything you put in front of him. That was J, “Mr. Fix It.” Now let’s be honest…J had a cranky disposition. And all who bore the brunt of J’s class ring to the back of their head can attest to such. J despised liberals, pimentos, sarcasm (although it was his forte), laziness, and imperfection. As J would say, “If you can’t do it right, then don’t do it. And if it breaks, fix it.” In honor of J, the family would ask that you write your Congressman and ask for the resignation of Barack Obama. This can only be viewed as his final protest, as anyone who spent the final weeks of J’s life with J will tell you, he went down politically swinging and his commentary on such was nothing short of enduring. But more importantly J was a man of God and he would not want us simply mourning. Rather, he would have us celebrating his new life, his being born again. The material world provides us with the environment to grow not only into physically mature adults, but into spiritually mature human beings, as we prepare to one day take our place in our heavenly home. This is the process Jesus called “being born again.” In John 3: verses 3-6, Jesus proclaimed, “Very truly I tell you, no one can see the kingdom of God without being born again.” It is from this spiritual perspective that we are communicated this truth: that J’s physical death is not death at all. Rather, it is his birth from this world into the next. J is in effect, born again. And it is this event, the death of J’s physical body and the rebirth of his spiritual one, which he would have us celebrate. In lieu of flowers, the family asks that you make a donation to The Journey Home. J spent his final days there and the family would also like to thank the staff at both the Journey Home and Jane Phillips Medical Center who took such great care of him. Finally, it is safe to say that J no longer has to lie to his wife Susie about where he has been all day. The truth is out…he’s fishing, but this time he is doing it with angels. A memorial service will be held at 10:30 a.m., Saturday, October 31, 2015 at Bartlesville First Baptist Church with Pasor James Biesiadecki officiating. Cremation arrangements are under the direction of Walker-Brown Funeral Home.

John Harley Hughey, fisherman, husband, father, and man of God, died on Wednesday October 28, 2015 at 10:15 a.m. at The Journey Home in Bartlesville, Oklahoma following a long battle with cancer. A battle that he didn&#8217;t lose, but one... View Obituary & Service Information

The family of John "J" Hughey created this Life Tributes page to make it easy to share your memories.

Send flowers to the Hughey family.