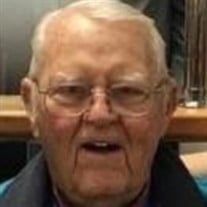 John Monroe Prentice, 93, Navy veteran and loving family man, died peacefully on Thursday, Dec. 24, 2020, at The Journey Home in Bartlesville. John was born January 11, 1927, in Washington, D.C., to Harvey and Ruth (Chalmers) Prentice. His schooling was completed in the D.C. area. He served in the U.S. Navy and was honorably discharged in 1947. John married Jacqueline Rose Broshears Oct. 4, 1948, at the Methodist Church in Rockville, MD. The couple lived in America’s capital city where John worked as a police officer until they moved to Oklahoma in 1952. He worked for Firestone until 1962. John then began his career with Phillips Petroleum Co. where he stayed until retiring in 1985. Once retired, John and Jacqueline enjoyed traveling in their RV and wintering in Arizona. They were members of the Holiday Ramblers RV Club. John and Jacqueline purchased a pecan grove in 1972 and expanded it over the years. They produced, harvested, cracked and sold their pecans. John and Jacqueline were shareholders in the Oklahoma Pecan Growers Association and John was a founding member number 19. John is survived by his sister Ruth Wornock; two daughters, Lynn Maddux and husband Tim of Bartlesville, Julie Boothe and husband Tim of Havana, KS; six grandchildren and 12 great-grandchildren. John loved his dogs, John John the shih-tzu and German shepherd Heidi. They were his spoiled rotten fur babies. He is preceded in death by his parents, wife Jacqueline, son John M. Prentice II, four brothers and a sister. Visitation will be held Monday from 10-8 at the Davis Family Funeral Home - Dewey Chapel, 918-534-3030, 113 S. Osage (Hwy. 75), Dewey, OK. In lieu of flowers, memorials may be made to The Journey Home, 900 NE Washington Blvd., Bartlesville, OK 74006. The family greatly appreciates the care they gave John in his final days. Graveside services will be held 11 a.m. Tuesday at Memorial Park Cemetery. Services are under the direction of Carter Davis and the Davis Family Funeral Home – Dewey Chapel. Online condolences and remembrances may be shared at www.DavisFamilyFuneralHome.com.

The family of John Monroe Prentice created this Life Tributes page to make it easy to share your memories.

Send flowers to the Prentice family.