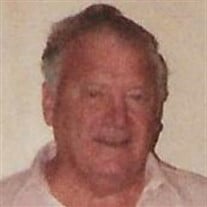 John Edward Pullins, 91, of Bartlesville, died Monday in Dewey. John was born the son of Charlie and Laurinda (Scott) Pullins on May 29, 1928 in Arkansas City, Kansas. He was raised in the Timberhill community near Wann, Oklahoma, and attended a country school near his home. He served in the U.S. Army between World War II and Korea and was stationed in Hawaii. While serving, John boxed in exhibition matches and won several trophies. These matches entertained the troops and it meant less KP time for John. Once honorably discharged, he settled in Blythe, California, where he joined his brother-in-law in the construction business as a carpenter. John met and fell in love with Darlene McLain and they married on May 4, 1952 in Quartzsite, Arizona. They made their home for the next 12 years in Blythe, California, where their four children were born. The following 12 years the family lived in Mesa, Arizona. They moved back and forth between Oklahoma and Arizona until 2014, when they finally settled in Bartlesville to be near their children. John enjoyed family fishing and camping trips when the children were younger. Together they enjoyed traveling and trips to Las Vegas. John was an avid sports fan and enjoyed watching sports as well as playing shuffleboard and pool. Most of all he loved his family and spending time with his children and grandchildren. John is survived by his loving wife of 68 years, Darlene of the home; three children, Johnie Pullins and wife Melisa of Canton, Texas, Randy Pullins and wife Pamela of Bartlesville and Alyssa Diane Pullins of Bartlesville; eight grandchildren, Chris Pullins, Laura Hamilton, Emily Pullins, Carey Jo Warner, Olivia Goodwin, Cory Pullins, Randy Pullins Jr. and Katey Pullins; and 13 great-grandchildren. He is preceded in death by his parents; one son, Danny Pullins; one granddaughter Kassadi Pullins, four brothers, Harold, Cecil, Donald and Raymond; and three sisters, Bernice, Etta and Mildred. John’s family will receive friends at the Davis Family Funeral Home – Walker Brown Chapel, 918-333-7665, 4201 Nowata Rd, Bartlesville, on Friday, January 3, from 3-4 p.m. Funeral services will be held 4 p.m. on Friday, January 3, at the Davis Family Funeral Home – Walker Brown Chapel, with Chaplin Jsue Wagner officiating. Services are under the direction of Carter Davis and the Davis Family Funeral Home – Walker Brown Chapel. Online condolences and remembrances may be shared at www.DavisFamilyFuneralHome.com.

John Edward Pullins, 91, of Bartlesville, died Monday in Dewey. John was born the son of Charlie and Laurinda (Scott) Pullins on May 29, 1928 in Arkansas City, Kansas. He was raised in the Timberhill community near Wann, Oklahoma, and attended... View Obituary & Service Information

The family of John E. Pullins created this Life Tributes page to make it easy to share your memories.

Send flowers to the Pullins family.