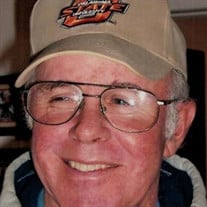 John Edward Watkins passed away Thursday, September 3, 2015 at Medicalodge in Dewey, OK. John had been a resident there for the past few years, after being stricken with Parkinson’s Disease. John was born May 3, 1949 at Memorial Hospital in Bartlesville, OK to John M. and Carla B. (Dickens) Watkins. He attended school his whole life in Dewey and graduated in 1967 from Dewey High School. After graduation John first attended Northeastern State University, in Tahlequah, OK and then transferred to Oklahoma State University, Stillwater, OK where he studied Mechanical Power Technology. On August 2, 1969 he married Teresa Rea of Bartlesville, OK. Together they had three beautiful children, two sons and a daughter. In January 1972, John and his wife moved to Glendale, AZ where he got a job with Wilbur-Ellis Chemical Company and became a licensed Entomologist. The Company promptly moved them to Blythe, CA, where he continued his work with the growers in the valley until October 1976. Returning to Oklahoma John worked for Toby Schmoll Construction Company. John started his own business Watkins Remodeling & Construction in January 1977, and was very successful building and remodeling homes until he was diagnosed with Parkinson’s in 2007. John lived a wonderfully blessed life. He was an avid bird hunter his whole life. Growing up on a farm north of Dewey he worked many jobs and learned many trades. He enjoyed racing Micro Midgets for many years, traveling across the United States from Indiana to California to participate. John was a terrific athlete in High School and had a love for Track. He became a volunteer coach for several years with the United States Track & Field program. He spent many hours teaching and training not only his own three children who were blessed with athleticism, but also many other youth of the Dewey and Bartlesville Communities. John is survived by his sons; Kelly Joe Watkins and his wife Shirley of Kansas City, KS, Michael Corey Watkins and his wife Maria of Dewey, OK, his daughter Lindsay Ann Sturgeon and her husband Brian of Rural Wann, OK, and his three beautiful grandchildren; Gavin Watkins, Kennedy Watkins-Sturgeon, and Cimarron Sturgeon. John is also survived by his Mother Carla Watkins of Dewey and two sisters; Linda Pyle and her husband Gearl of Elmore City, OK, and Mary Downing and her husband Don of Raymore, MO, plus many loving relatives and friends. Services for John will be a private time at the beloved family farm north of Dewey.

John Edward Watkins passed away Thursday, September 3, 2015 at Medicalodge in Dewey, OK. John had been a resident there for the past few years, after being stricken with Parkinson&#8217;s Disease. John was born May 3, 1949 at Memorial Hospital... View Obituary & Service Information

The family of John Watkins created this Life Tributes page to make it easy to share your memories.

Send flowers to the Watkins family.