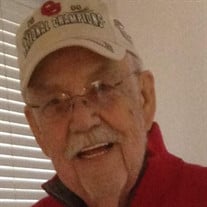 John Perry Whitworth passed away from COVID-19 complications on Feb. 1, 2021. John was surrounded by his loving family with John Matthew holding one hand and Vicki holding the other. John was born Jan. 29, 1937, in Sallisaw, OK, in his Grandma Whitworth's home, to Clyde and Juanita Carson Whitworth. John attended Sallisaw schools and for a brief time in Chicago schools. He graduated from Sallisaw High School and was proud of his hometown and the Sallisaw Black Diamonds. When visiting family back home, he would always tell Vicki as they crossed that Arkansas River bridge, "You're in Sequoyah County now" and smile. He loved the hills there. John graduated from University of Phoenix in 2001 with a Masters degree in Business. He entered the U.S. Air Force and while stationed in Birkenfeld, Germany, he played on the Air Force football team as quarterback and the basketball team. John returned to the States after serving in the Air Force and attended University of Tulsa on a football scholarship as quarterback until funding was cut, then signed to play for New Mexico State. John next played semi-pro football for Tulsa Wildcats, followed by signing with the Canadian Football League and was there two years. John returned home to Oklahoma and married Ann. They moved to Chicago where John attended drafting school. John worked for AT&T in Chicago and later moved to Tulsa. He met and married Judy Land in Cincinnati, Ohio, and they had a son John Mathew. He later married Vicki Cranor and they were married 35 years. Besides his son John helped to raise five children, all of whom he held dear to his heart. John was very proud of his work in mechanical engineering for NASA on the Gemini and Apollo series. His work as a mechanical engineer took him worldwide from Beirut in Lebanon to Mexico City to Canada. John loved his family and wanted his boys to all succeed in life, and his family loved him back. John is survived by Vicki and his sister Lou Gronnert of Eau Clair, Wisconsin. Children surviving John are: John M & Amanda Whitworth, Bartlesville, Sherry & Tom Kurtz of Florida, Shirley & Chris Bingham of Baton Rouge, Louisiana, David & Jen Cranor of Sayre, PA, John C. & Amy Whitworth Bixby, OK, J.R. Whitworth of Ramona, OK; as well as special niece Alicia Byard and son Hayden Byard; 14 grandchildren: John E. & Paige Whitworth, Matthew Whitworth, Katherine Whitworth, Sarah Chauvin, Sydney Bingham, Nicole Lacono, Hailee (Mackenzie) Evans, Kali Gray, Kieran Cranor, Dakota Whitworth, Jaycie Whitworth, Brooklyn Whitworth, Wyatt Whitworth, and LeiLani Whitworth; and six great grandchildren. John was preceded in death by his parents and sister Judy Yoakum. A Memorial Service will be held March 6, 2 p.m. at the Ochelata Cemetery Pavilion. COVID-19 precautions will be taken. Arrangements are under the direction of Carter Davis and the Davis Family Funeral Home & Crematory – Walker Brown Chapel. Online condolences and remembrances may be shared at www.DavisFamilyFuneralHome.com

John Perry Whitworth passed away from COVID-19 complications on Feb. 1, 2021. John was surrounded by his loving family with John Matthew holding one hand and Vicki holding the other. John was born Jan. 29, 1937, in Sallisaw, OK, in his Grandma... View Obituary & Service Information

The family of John Perry Whitworth created this Life Tributes page to make it easy to share your memories.

Send flowers to the Whitworth family.