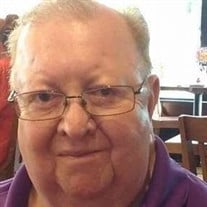 Johnnie Lee Henshall, 76, lifelong Bartlesville resident, died Friday in Bartlesville. Johnnie was born the son of Willard Lee and Serviana (Martinez) Henshall on May 16, 1943, in Bartlesville, OK. Growing up he enjoyed hunting and fishing. Johnnie graduated from College High with the Class of 1961. The Wildcat joined Reda Pump and enjoyed more than 35 years of faithful service with the company. Johnnie’s daughter Kimberly introduced him to Gerti Tausch and a relationship soon formed. They were united in marriage on June 24, 1983 and enjoyed 36 years of loving marriage. Johnnie was a longtime member and Past President of the Fraternal Order of The Eagles Aerie 610. He and Gerti traveled to Eagles conventions throughout the country from New York to Washington State. Johnnie would say “I’ve never been anywhere, but now I can say I’ve been almost everywhere”. Johnnie and Gerti always had fun together whether it was going to Branson, MO, eating at Murphy’s or calling bingo. He loved karaoke and was known as “Rockin Johnny” for his renditions of Amarillo By Morning, Silver Wings and Hello Darling. Johnnie teamed up with Delacey Smith to perform a Blues Brothers skit that they were famous for. Johnnie loved to play golf, visit and joke around. He will be dearly missed. Johnnie is survived by his loving wife Gerti of the home; three children, Debby Gehrke and Tim of Broken Arrow, Kenny Henshall and Cristy of Bartlesville, and Kimberly Dyer and Darrell of Nowata; one sister Gloria Jones and Johnny; seven grandchildren, Chett Gehrke and Devin, Chadd Gehrke and fiancé Hillary Calvert, Dalton Henshall and Cassie, Kaylee Replogle and Justin, Isabella Baughman, Kyle Scheer and Zachary Scheer; three great grandchildren, Nolan, Lily, and Cadence; nephew Joshua Jones and Cashmere; niece Stephanie Mata and boyfriend David; and a host of other family and friends. He was preceded in death by his parents and favorite cat Booger. Johnnie’s family will receive friends at the Davis Family Funeral Home - Walker Brown Chapel, 918-333-7665, 4201 Nowata Rd, Bartlesville, on Tuesday, from 6-7 p.m. A rosary will be said at 7 p.m., in the Davis Family Funeral Home - Walker Brown Chapel. Visitation will also be held on Tuesday from 9-8 and Wednesday 9-12. Funeral Mass will be held 2 p.m. Wednesday, at St. John Before the Latin Gate Catholic Church, with Rev. Father Carlos Loaiza officiating. Interment will follow in White Rose Cemetery. Services are under the direction of Carter Davis and the Davis Family Funeral Home – Walker Brown Chapel. Online condolences and remembrances may be shared at www.DavisFamilyFuneralHome.com.

The family of Johnnie Lee Henshall created this Life Tributes page to make it easy to share your memories.