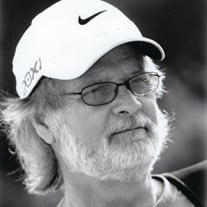 Johnny Harrell Price Jr., 66, of Copan, died Wednesday in Copan. Johnny was born the son of Harrell Sr. and Melbalene (Evans) Price on October 30, 1954, in Holdenville, OK. During his childhood, his family lived in town but also leased land where Johnny and his brother Robbie kept their horses and raised cows. Johnny enjoyed playing baseball and hanging with friends. He graduated from Holdenville High School in 1972 and then attended Okmulgee Tech, completing a degree in drafting, which brought him to Bartlesville with Phillips. Johnny soon realized he wanted to pursue a degree in chemical engineering and moved to Norman, where he attended the University of Oklahoma. Johnny met Sheila at Phillips through mutual friends. Even though they were meant for each other, they dated for many years before tying the love knot on April 25, 1987. The couple made their home in Copan. After graduating from OU, Johnny worked in law enforcement a short while before taking a position at the Coffeyville Hazardous Waste incinerator, until the business shut down. He then landed at Siemens in Bartlesville for the next 25 years until retiring in 2020. Johnny’s passions in life revolved around his family, golfing with the kids, attending all of their sporting events and target shooting. Together with Sheila they were customizing their 1940 Ford coupe. They also enjoyed taking cruises to the Caribbean and Mexico with family and friends. Johnny could be found smoking his “ceegars” as he called them on the smoking deck. Dear to his heart were his two cats, Stripes and Star, who miss him dearly. Johnny did nothing for just himself but loved doing for others. Johnny is survived by his loving wife of 34 years, Sheila; parents, Harrell Sr. and Melbalene Price; two children, Taylor Blackburn and husband Tyler, and Jacob Price and partner Brittany Bodi; grandson, Zaidin Anderson; brother; Robbie Price and Michelle; cousins, Donna Leewright and Mike, Ronnie Langdon and Susie and Tootie Langdon; and a host of other family and friends. Johnny’s family will receive friends at the Davis Family Funeral Home – Dewey Chapel, 918-534-3030, 113 S. Osage (Hwy. 75), Dewey, on Sunday, from 3-5 p.m. Funeral services will be held 2 p.m. on Monday, at the Davis Family Funeral Home - Dewey Chapel, with Pastor Tim Bryan officiating. Interment will follow in the Dewey Cemetery. Services are under the direction of Carter Davis and the Davis Family Funeral Home – Dewey Chapel. Online condolences and remembrances may be shared at www.DavisFamilyFuneralHome.com.

Johnny Harrell Price Jr., 66, of Copan, died Wednesday in Copan. Johnny was born the son of Harrell Sr. and Melbalene (Evans) Price on October 30, 1954, in Holdenville, OK. During his childhood, his family lived in town but also leased land... View Obituary & Service Information

The family of Johnny Price Jr. created this Life Tributes page to make it easy to share your memories.

Send flowers to the Price family.