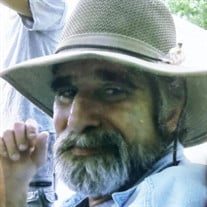 Johnny Boyd Tennison, 67, of Dewey, died Saturday in Tulsa. Johnny was born the son of John Calvin and Mavis (Eveland) Tennison on June 28, 1954, in Tulsa. He was raised in Tahlequah and learned from an early age the value of hard work at his father’s bait shop off Highway 10. After graduating from Tahlequah High School in 1973, Johnny joined the Painters Union Local 1895. This led him to Bartlesville to work on the Phillips Petroleum Co. buildings for 17 years. He went on to work at the Williams Center where he painted and refinished furniture for several years before starting his own business Men-In-White specializing in painting and furniture refinishing. One fine day, Johnny met Therese Angleton at a friend’s party, and after her ride left, Johnny offered her a ride home all the way to Coffeyville, KS. Johnny asked her out to an Eagles concert, and this kicked off a beautiful relationship which resulted in marriage on April 17, 1982. Johnny adored his wife and she became the center of his world. They pledged the best of their love to one another and their union was blessed with 39 years of marriage and three sons. Johnny loved the outdoors and sharing it with their family - fond memories of quiet hikes and not-so-quiet cookouts at Bardew Lake come to mind. At home Johnny tended his flowers and garden, keeping an eye out for visiting birds and enjoyed watching them. He was a good provider for his family and enjoyed watching his children and grandchildren’s many activities. He also became a rent-a-dad to his sons’ many friends along the way, making a profound difference in all their lives. Johnny collected marbles and usually had a handful in his pocket for illustrating his catchphrase “Don’t loose your marbles” as a foreman for many years. Most everyone around him has heard his familiar call to action “Get to Steppin’.” Johnny was dearly loved. Johnny is survived by his loving wife Therese of the home; three sons, Jay (Shannon) Slack, Caleb Tennison, and Justin (Sara) Tennison; six grandchildren, Hallie Biesiadecki, Carson Tennison, Whitlie Tennison, Jasper Slack, Jaxon Tennison, and Jarrett Tennison; stepmom Judy Tennison; as well as numerous cousins, nieces, nephews, and his many good friends. He is preceded in death by his parents, son Robert Tennison, and brother Stephano Tennison. In lieu of flowers, memorial donations may be made to the American Heart Association, PO Box 840692, Dallas, TX 75284-0692. Services will be held 10 a.m. on Friday, August 20, at the Davis Family Funeral Home & Crematory – Walker Brown Chapel, 918-333-7665, 4201 Nowata Rd, Bartlesville. Jamie Kelly (City Church) will officiate. Masks are required and Johnny’s family thanks you in advance for your understanding and cooperation. Services are under the direction of Carter Davis and the Davis Family Funeral Home & Crematory – Walker Brown Chapel. Online condolences and remembrances may be shared at www.DavisFamilyFuneralHome.com.

Johnny Boyd Tennison, 67, of Dewey, died Saturday in Tulsa. Johnny was born the son of John Calvin and Mavis (Eveland) Tennison on June 28, 1954, in Tulsa. He was raised in Tahlequah and learned from an early age the value of hard work at his... View Obituary & Service Information

The family of Johnny Boyd Tennison created this Life Tributes page to make it easy to share your memories.

Send flowers to the Tennison family.