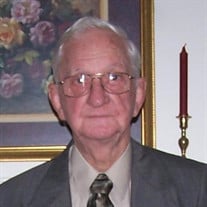 Joseph “Joe” Russell Tucker, 91, departed this earth for his Heavenly home, Wed., Jan. 15, 2020. The Phillips retiree and pioneering computer programmer cherished his wife, family, and learning throughout his life. Joe was born Jan. 16, 1928, to William Peyton and Edna Ellot (Privett) Tucker, in the Wildhorse community between Skiatook and Hominy, OK. At an early age the family moved to Hominy. Joe attended many schools, beginning with Hominy for two years, Barnsdall for seven, Vinita for two, and Claremore for senior year, graduating with the class of 1946. While in Vinita, Joe worked for the Wardrobe Cleaners and Shoe Rebuilders, learning every facet of those businesses. He worked in shoe repair in Vinita, Claremore, Collinsville, Tulsa, Bethany, and Muskogee. In 1948, Joe met the love of his life Ramona Napier after her family attended the West Tulsa Nazarene Church. When a mutual friend asked to take Ramona to her apartment, Ramona said no, that Joe was going to see her home. Joe thought that was a good idea and took her to the YWCA where she lived. They soon married on March 29, 1948, and had 69 good years and four children together. The newlyweds lived in Skiatook; Beech Grove, Arkansas; Tulsa; Muskogee; and Barnsdall where they pastored small churches and Joe continued to repair shoes. In 1952, Joe got a job with Phillips Petroleum Co. Treasury Department as an IBM trainee. In 1955, the first computer was installed in Treasury and Joe was selected to learn how to program the IBM 650 and print reports. In 1957, Phillips created a Computing Dept, and Joe and 58 others transferred into it. The first application Joe programmed was the accounts payable system, followed by a payroll program for Borger, TX, area plants. Next came an assignment with a transfer to Kansas City, MO, where Joe and the group of programmers wrote software and installed the credit card office computers. Phillips transferred Joe back to Bartlesville where he continued to work on various departments’ computer problems. He retired from Phillips, initially in 1985, but went back two years later, as a trainer on credit card machines and travelled all over the US for two years before retiring again in 1990. Joe had many hobbies including home computers, Ham radio (KN5W), coaching little league baseball, water skiing, fishing, swimming, bowling, flying, and genealogy. For about 15 years, he used ham radio with the Civil Defense in tracking storms and floods. Joe got his private pilot’s license at the old Dewey airport. Then he and two other pilots organized the BVO Flying Club and bought three planes for Bartlesville airport-based club. Joe was a pioneer in many areas, as well as a lifesaver. In 1960, Joe’s family was vacationing on Lake Tenkiller when Joe heard a scream for help and jumped into the lake to help the man rescue two unconscious ladies. Joe administered artificial respiration to one while the other man worked on his wife. After a few minutes, both ladies started breathing normally and recovered. Joe’s quick thinking and heroic action earned him Phillips and American Petroleum Institute Meritorious Safety Awards. Joe was preceded in death by Ramona, and three children: Billy Joe, David Lee, and Patricia Lavon Sanders. Surviving Joe are son Ron and Carol of Barnsdall; son in law Bill Sanders of Woodward; granddaughters Leslie Stephens and Bob, and Shelby Tucker; grandsons Daniel Sanders and Kim, and Scott Tucker and Jessica; and great grandchildren Nathan Goforth and Natalie Tucker. Joe’s family will receive friends at the Davis Family Funeral Home – Walker Brown Chapel, 918-333-7665, 4201 Nowata Rd, Bartlesville, on Sunday, 3-5 p.m. Visitation will also be held on Sunday from 12-5 and Monday 9-12. In lieu of flowers memorials may be made to the Journey Home, 900 NE Washington Blvd., Bartlesville, OK 74006. Funeral services will be held 2 p.m. Mon., at Bartlesville First Church of the Nazarene, with Dr. Russell Hosey officiating. Interment will follow in the Ethel Reece Cemetery in Barnsdall. Services are under the direction of Carter Davis and the Davis Family Funeral Home. Online condolences and remembrances may be shared at www.DavisFamilyFuneralHome.com.

The family of Joseph "Joe" Russell Tucker created this Life Tributes page to make it easy to share your memories.

Joseph “Joe” Russell Tucker, 91, departed this earth for his...

Send flowers to the Tucker family.