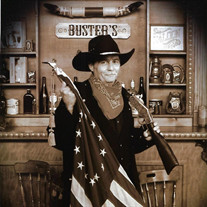 Joseph “Joe” Dale Parrett Sr., 60, of Bartlesville, died Friday in Bartlesville. He fought a good fight in this earthly life but is now in his forever home with his Heavenly Father. Joe was born the son of Robert “Bob” Lee and Katherine “Kay” Ruth (Purdum) Parrett on Jan. 23, 1959 in Killeen, TX. His father Bob was stationed at Fort Hood in Killeen, TX, and the family returned to Bartlesville area when Joe was an infant. Joe attended Bartlesville schools and fondly remembered participating in the Reserve Officers’ Training Corps (ROTC) program, graduating from College High in 1977. He worked for Phillips Petroleum Co. for many years before entering the construction trade where for most of it, he was self-employed. Joe meet Laronda Fanning through a mutual friend, and they dated for a few years before uniting in marriage on Oct. 26, 2006. Joe had many passions in life. In his early days it was motorcycles, later on he enjoyed hunting, fishing and shooting. Joe was a jack of all trades and enjoyed working with his hands. Together Joe and Laronda enjoyed taking trips to Branson and staying home to watch TV. Joe grew up in the Dewey Church of the Nazarene and he loved the Lord. Oftentimes Joe and Laronda would simply sit and read their bible together. Above all, his children were his pride and joy, and Joe often recounted how happy he was when each one of them were born. He loved spending time with the grandkids and taking them on special fishing trips – it was a pastime and love that his father Bob had passed on to Joe and they shared it with younger generations of Parretts. Joe will be dearly missed. Joe is survived by his loving wife Laronda of the home; mother Kay Parrett; four children, Joseph Dale Parrett Jr., Robert Paul Parrett and Angie, Robin Kay Cox and Alex, and William James Hines II; two brothers, Mark James Parrett, and Paul Dee Parrett and Amy; 10 precious grandchildren; several nieces and nephews, and Gizmo the Pomeranian. Joe is preceded in death by his father, son Corey Lee Parrett and sister in law Janet Marie Parrett. Funeral services will be held 11 a.m. Sat.,, at the Dewey Church of the Nazarene, with Pastor Joel Heid officiating. Services are under the direction of Carter Davis and the Davis Family Funeral Home – Dewey Chapel. Online condolences and remembrances may be shared at www.DavisFamilyFuneralHome.com.

Joseph &#8220;Joe&#8221; Dale Parrett Sr., 60, of Bartlesville, died Friday in Bartlesville. He fought a good fight in this earthly life but is now in his forever home with his Heavenly Father. Joe was born the son of Robert &#8220;Bob&#8221;... View Obituary & Service Information

The family of Joseph Parrett created this Life Tributes page to make it easy to share your memories.

Send flowers to the Parrett family.