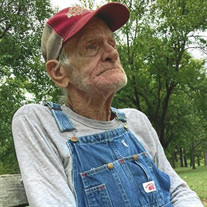 Joseph Winford Wohlford, 91, of Ochelata, joined his beloved wife Ethel in their heavenly home on Wednesday, August 11, 2021. Joseph was born December 27, 1929, in Bartlesville, to Raymond F. and Jewel A. (Liston) Wohlford. A lifelong resident of the area, he went to Trusket School in Hogshooter. Joseph was a truck driver, a master mechanic and could build anything. His family said he was a jack-of-all-trades. In his early years he worked as a carnival worker and traveled the United States. In addition to those trades, Joseph had even been a stunt driver for Joey Chitwood. He was an entrepreneur and had moved mobile homes for 20 years. Later in life, he worked in oilfields as a pumper and also helped his son Ron in the oilfields. Joseph was a longtime member of Labadie Heights Baptist Church. While working as a carnival worker in Lincoln, Nebraska, Joseph met the love of his life, Ethel Irene Berlie, in Nebraska and they married in 1959 at Plainview, Texas. She preceded him in death on May 15, 2012. Joseph was quite a character. His family will never forget the lessons and example he set for them. He was honest, dependable, loving and loyal. He let his children make their own choices, but whatever choices they made, they had to face those consequences. Joseph’s children said their father told them if they were going to be stupid, they better be tough. He modeled integrity and internal strength. He was loved by everyone who knew him. Joseph’s greatest enjoyment was his grandchildren. He also liked to work on cars, stock car racing and watching wrestling. Joseph is survived by his children, Richard Wohlford and his wife Pamela of Bartlesville, Ronald Wohlford of Ochelata, and Danielle Argo of Oglesby; his caretaker, Angela Ellis of the home; a brother, Jack Wohlford of Bloomsberg, Pennsylvania; 10 grandchildren, 29 great-grandchildren, 7 great-great-grandchildren; and numerous nieces, nephews, family and friends. In addition to his parents and wife, Joseph was preceded in death by a son, Joseph Wohlford Jr.; a daughter, Doris Jean Wohlford; his siblings, Francis Widowski, Ed Dell Wohlford, John Burton Wohlford, Raymond Fremont Wohlford and Inez Schussler. Joseph’s family will receive friends at the Davis Family Funeral Home & Crematory – Walker Brown Chapel, 918-333-7665, 4201 Nowata Rd., Bartlesville, on Monday, August 16, from 6-8 p.m. Visitation will also be held on Monday from 10-8 and on Tuesday from 10-noon. Funeral Services will be held at 2 p.m. Tuesday, August 17, at the Davis Family Funeral Home & Crematory – Walker Brown Chapel. Interment will follow in the Oglesby Cemetery. Services are under the direction of Carter Davis and the Davis Family Funeral Home & Crematory – Walker Brown Chapel. Online condolences and remembrances may be shared at www.DavisFamilyFuneralHome.com.

The family of Joseph Winford Wohlford created this Life Tributes page to make it easy to share your memories.

Send flowers to the Wohlford family.