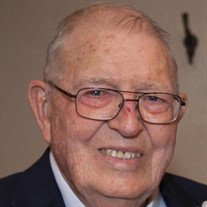 Josh Edwin Lee, 83, of Bartlesville, died Thursday in Bartlesville. Josh was born July 24, 1936, to Samuel and Ellen (Kirby) Lee in Stillwater, OK. Along with brother John and sister Irene, Josh was raised on a land run homesteaded farm where he graduated from Perkins High School in 1954. He attended Oklahoma A&M, now known as OSU, and received his Associates degree in Diesel Technology. In 1954, Josh enlisted in the National Guard, proud to be able to serve his country and state. Josh married the love of his life, Edna Sarah Westfall, on July 2, 1955, in Perkins, OK. In 1956 they moved to Bartlesville and Josh began working for Phillips Petroleum Co. as a Research Technician before retiring in 1992. Together they raised their children Ronald and Brenda. Josh was always known as the man who could build and fix ANYTHING. He loved spending his time restoring antique cars of the early 1900’s and attending antique car tours with Edna where they won many awards for both the cars and the costumes they wore. He was a longtime member of the Horseless Carriage Club of America as well as a charter member of the Mitchell Car Club of America. He was also a longtime and active member of Oak Park United Methodist Church, with him and Edna always involved in any way they could help. Josh was always a man you could trust - a handshake from him was as binding as a contract. Josh is survived by his loving wife Edna of the home; children Ronald Lee and wife Susan of Collinsville, OK, Brenda Stoops and husband Eric of Coffeyville, KS; five grandchildren: Joshua Lee and wife Amy, Amy Barnes and husband Dallas, Elden Stoops Sr., Kaylee Andrews and husband Matt, and David Stoops; and five great-grandchildren. He is preceded in death by his parents, sister Irene Harral and brother John Lee. Visitation will be held Monday noon - 8 p.m. and the family will receive friends from 5-7 p.m. A celebration of Josh’s life will be held at 10 a.m. Tuesday, all at the Davis Family Funeral Home – Walker Brown Chapel, 918-333-7665, 4201 Nowata Rd, Bartlesville. Interment will follow at 3 p.m. at Perkins Cemetery. Services are under the direction of Carter Davis and the Davis Family Funeral Home & Crematory – Walker Brown Chapel. Online condolences and remembrances may be shared at www.DavisFamilyFuneralHome.com. In lieu of flowers, the family has asked that donations be made in Josh’s name to St. Jude Children’s Research Hospital, and Cornerstone Hospice.

Josh Edwin Lee, 83, of Bartlesville, died Thursday in Bartlesville. Josh was born July 24, 1936, to Samuel and Ellen (Kirby) Lee in Stillwater, OK. Along with brother John and sister Irene, Josh was raised on a land run homesteaded farm where... View Obituary & Service Information

The family of Josh Edwin Lee created this Life Tributes page to make it easy to share your memories.

Send flowers to the Lee family.