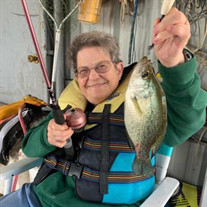 Kathryn B. Spencer, longtime area resident, died peacefully Wednesday in Bartlesville. She was 76 years young and she sparked joy wherever she went. While she is now rejoicing in Heaven where she has been made whole, Kathy will be missed by her beloved family and friends - whether they ever attended her birthday parties or missed out on the annual fun. Kathryn - or Kathy as she was known - was born the daughter of Ralph Franklin and Opal Bernice (Jordan) Spencer on February 24, 1946, in Torrance, a city in Los Angeles South Bay area, California. Shortly after her birth the family moved to Dewey, Oklahoma. Her father worked for Keener Oil Company before opening his own Spencer Oil Company which is still in operation today. When her brothers Bill and Tony were asked about Kathy’s growing up years, they described their sister as “a tad bit ornery, with a beautiful smile.” Early on Kathy developed a passion for animals and almost always had a dog who was spoiled rotten. At one point she ventured out with a pet iguana Bob-a-Lu - it started out small but quickly grew into a three-foot, somewhat scary-looking but very loving companion. Occasionally making appearances in public, riding around her neck. That was Kathy whose heart was as big as her grin. Shopping was her lifelong passion and indulgence. Kathy never met anyone who could outshop her. Her eye was quickly drawn to anything that lit up, made noise or was her favorite color purple. Over the years Kathy enjoyed numerous special family vacations with her brothers to Disney World, Branson especially Dixie Stampede, and Graceland the Memphis, TN, home of the ‘King.” She was a huge Elvis and Rock and Roll fan, one time even staying in an Elvis themed hotel. One special trip to Branson she scored front row center tickets to the Elvis Review where lucky brother Tony became the star of the show when he was called on stage to sing alongside the Elvis performer - Kathy got a real kick out of it. Kathy knew everyone and they loved her back. She had nicknames for everyone and wasn’t afraid to call on her friends for help. She loved ‘em all without ceasing. She also loved gardening and grew tomatoes and peppers, and enjoyed special trips to the lake where she fished enthusiastically. But most memorably Kathy had her own special birthday tradition. About a month before her birthday each year, she would start calling everyone to let them know the big day was approaching and to get ready for the big party. She was tenacious in the nicest way. Kathy was dearly loved and was a real joy. Kathy is survived by her brothers Bill (Sandy) Spencer and Tony (Susan) Spencer, her fur baby Sophie Spencer the Shih Tzu, and numerous nieces and nephews. She is preceded in death by her parents, sister Judi Levingston and two nephews Bobby Levingston and Jeff Spencer. Visitation will be held on Wednesday from 10-8 and Thursday 9-1 at the Davis Family Funeral Home & Crematory – Walker Brown Chapel, 918-333-7665, 4201 Nowata Rd, Bartlesville. Services will be held 2 p.m. Thursday at the Davis Family Funeral Home & Crematory – Walker Brown Chapel, with Pastor Mike Whitney officiating. Interment will follow in the Dewey Cemetery. Services are under the direction of Carter Davis and the Davis Family Funeral Home & Crematory – Walker Brown Chapel. Online condolences and remembrances may be shared at www.DavisFamilyFuneralHome.com.

Kathryn B. Spencer, longtime area resident, died peacefully Wednesday in Bartlesville. She was 76 years young and she sparked joy wherever she went. While she is now rejoicing in Heaven where she has been made whole, Kathy will be missed by... View Obituary & Service Information

The family of Kathryn "Kathy" Bernice Spencer created this Life Tributes page to make it easy to share your memories.

Send flowers to the Spencer family.