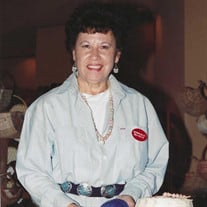 Kathryn Lorine Kelley, 90, National Treasure of the Cherokee Nation, master artisan, esteemed elder and mother, died Sunday in Bartlesville. There is no word for goodbye in her beloved native tongue, so “Donadagohvi” in Cherokee means “til we meet again.” Kathryn was born the daughter of Johnson and Bertha (Allen) Keith on June 12, 1930, at home in Rocky Mountain, a native community between Tahlequah and Stilwell in Oklahoma. She was raised in the Echota community in Adair County. Her father was a full-blood Cherokee Baptist Minister. Her grandmother had a strong influence on her life and with her help Kathryn became fluent in the Cherokee language. Kathryn graduated from Stilwell High School in 1948 and went on to pursue a degree in education at Northeastern State in Tahlequah. During her second year she met Bob M. Kelley. They married on Dec. 22, 1953, and she joined him in Albuquerque, NM, where he was stationed in the service and daughter Renee was born. Once honorably discharged the family made their home in Tulsa. Kathryn taught mostly second grade, at first in a two-room schoolhouse in the Leonard Bixby area, then for Tulsa public schools at Alcott and Perry elementary schools. After 30 years faithful service, she retired. Bob and Kathryn moved to Bella Vista, AR, once Bob retired a second time they moved to Grove, OK, before relocating to Bartlesville in 2015 to be near their daughter. Kathryn was a recognized National Treasure with the Cherokee Nation - not only was she fluent in the Cherokee language, but she was an acclaimed Native American Basket Weaver. She created traditional Cherokee honeysuckle baskets using honeysuckle vines and natural dyes such as black walnut, bloodroot and pokeberry. She showed and showcased her beautiful baskets all over and was a regular presenter at Indian Summer Artisan Gallery. It was at Oklahoma Indian Summer that celebrities sought out and collected her baskets including Cherokee native actor Wes Studi and beloved comic actor Jim Nabors. Kathryn was always ready to share her knowledge of basketry and oftentimes included the young grandkids in gathering Buck Brush. She taught basket making throughout the local communities. In recent years her knowledge of the Cherokee language has been preserved with the help of her daughter. Kathryn is survived by her daughter Renee Lenertz; five grandchildren, Jeremy (Brittany) Lenertz, Caleb Lenertz, Adam (Brittany) Lenertz, Jeff (Jeanne) Lenertz and Kevin Lenertz; five great grandchildren Elise, Celia, Chase, Lukas and Elisabeth;, two nephews Eddie and Joe Keith; and one niece Sue Rosander. Services will be held 11 a.m. Saturday, at the Disciples Christian Church in Bartlesville. Services are under the direction of Carter Davis and the Davis Family Funeral Home & Crematory – Walker Brown Chapel. Online condolences and remembrances may be shared at www.DavisFamilyFuneralHome.com.

Kathryn Lorine Kelley, 90, National Treasure of the Cherokee Nation, master artisan, esteemed elder and mother, died Sunday in Bartlesville. There is no word for goodbye in her beloved native tongue, so &#8220;Donadagohvi&#8221; in Cherokee... View Obituary & Service Information

The family of Kathryn Lorine Kelley created this Life Tributes page to make it easy to share your memories.

Send flowers to the Kelley family.