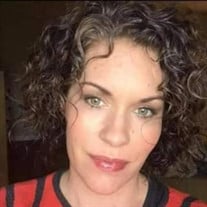 Katy Griffin Hamilton, age 38, passed into eternity Saturday from her home in Oklahoma City. She was born to Terry Dee and Penny (Beougher) Griffin on September 4, 1982 in Bartlesville. Growing up, Katy adored her older brother Kelsey. They were best friends, greatest rivals, and did everything together. Katy was an accomplished gymnast, having competed on the Phillips 66 Gymnastics team for 9 years until an injury ended her promising career. She was active in the many youth activities of Bartlesville First Church, and genuinely loved God. In 2001 Katy graduated with her class at Bartlesville High School, and then continued her education at the University of Central Oklahoma, eventually earning a Bachelors degree in 2012 from the College of Fine Arts and Designs with a focus on Studio Arts/Photography, and minors in Art History and Business. Katy used her love of children, sports, and her natural leadership abilities in her work as a coordinator and director of baseball and soccer leagues for the City of Oklahoma City. Her love of animals led her to meet her future husband, Sean, when she noticed some dogs loose in her neighborhood and began investigating to whom they belonged. Katy’s son, York, was four years old when Sean entered their lives. Katy and Sean were married at the historic Round Barn in Arcadia on September 21, 2013, and made their home in the same neighborhood where they met. Katy’s gifts of forming lifelong friendships and organizing community events resulted in a formerly disconnected, and multiethnic community coming together each year for Memorial Day and Labor Day block parties. Even after Sean and Katy moved to a different neighborhood the parties continued and they returned to renew friendships with former neighbors. Of the many passions Katy had, her life centered on the arts, friends, and family. She saw the world through eyes of wonder and expressed her wonder through painting and photography. And she generously shared her knowledge with anyone who was interested. Living according to the philosophy that “the best thing to hold on to in life is each other”, Katy cherished time spent with family. When she made a friend it was for life. Katy is deeply loved and her memory will live on in the hearts of all she touched, both family and friends. Katy is survived by her husband, Sean; son William York Bales; parents Terry Dee and Penny (Beougher) Griffin; paternal grandparents James LeRoy and Lillian Arnell Griffin; maternal grandmother Garry Lu Beougher; father-in-law David Mark Hamilton (Ann); mother-in-law Cynthia Botchlet (Danny); and a host of other family and friends. She is preceded in death by her brother James Kelsey Griffin (2006) and maternal grandfather Cleo Dean Beougher. Visitation will be held at Davis Family Funeral Home & Crematory - Walker Brown Chapel, 918-333-7665, 4201 Nowata Road, Bartlesville, on Friday, noon-8:00pm, with family receiving friends 6:00-8:00pm. A memorial service/celebration of life will be held 1:00pm on Saturday at Bartlesville First Church, 4715 Price Road, Bartlesville. Online condolences and remembrances may be shared at www.DavisFamilyFuneralHome.com.

Katy Griffin Hamilton, age 38, passed into eternity Saturday from her home in Oklahoma City. She was born to Terry Dee and Penny (Beougher) Griffin on September 4, 1982 in Bartlesville. Growing up, Katy adored her older brother Kelsey. They... View Obituary & Service Information

The family of Katy Griffin Hamilton created this Life Tributes page to make it easy to share your memories.

Send flowers to the Hamilton family.