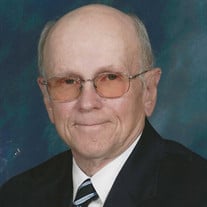 Keith Cole, longtime Bartlesville resident, died at home Tuesday in Bartlesville. He was 83 years young, a proud U.S. veteran and even prouder husband, father, grandpa and great-grandpa. Keith was a friend to many and a son of the Living God. Keith was born the only child of Murlen Emery and Ruth Marie (McCormick) Cole on September 30, 1937, in Kansas City, MO. He was raised and finished his formal education in Great Bend, KS, graduating in 1955. Keith served eight years in the U.S. Army Reserve and during the early sixties he moved to Bartlesville for work. Keith worked for Reda Pump for 20 years then started a second career at Wal-Mart, retiring as department manager of Paint and Hardware. While grabbing lunch at the Hamburger Place, Keith noticed Rolena Riff working. She caught his eye and after a short courtship and engagement they were married on September 2, 1967, and they enjoyed 54 years of loving marriage. Keith was busy throughout his life and had many passions. He took great pride in caring for his lawn and home. He always had a project going on to better its appearance. Keith was also fascinated by all aspects of train history, having developed a love for trains at a young age from his father who collected model trains. Being a loyal OU Football fan, he always wore his OU hat and it was never hard for Keith to strike up a conversation with anyone. In truth, he never met a stranger but only a new friend-in-the-making. Keith thought he had a great sense of humor, though Rolena wasn’t always so sure about that. When the kids were young, they enjoyed camping and fishing, and in later years traveling. He was a longtime member of the Dewey Christian Church. Keith leaves behind a legacy of love for his wife, children, grandchildren and great-grandchildren, and as the song goes, it’s a love without end, amen. Keith is survived by his loving wife Rolena; children, Regina and Brian Kennedy, Patrick Cole, Christy Rice, Kimberly Cole Mendoza and Liz Cole Wing; grandchildren, Michael and Gabriela Calhoun, David and Marla Calhoun, Amanda Calhoun, Sarah Kennedy, Matthew Kennedy, Jacob Kennedy, Pedro Mendoza Jr., Elyseo Mendoza, Justin Wing, Shea Wing, Wyatt Cole and Tesa Cole; and great-grandchildren, Juan David Saucedo, Emely Calhoun and Alia Calhoun. He is preceded in death by his parents and granddaughter Rebecca Ruth Kennedy. Visitation will be held on Sunday from 12-5 at the Davis Family Funeral Home & Crematory – Walker Brown Chapel, 918-333-7665, 4201 Nowata Rd, Bartlesville. Services will be held 10 a.m. on Monday at the Davis Family Funeral Home & Crematory – Walker Brown Chapel, with Pastor Casey Parham officiating. Interment will follow in the Memorial Park Cemetery. Services are under the direction of Carter Davis and the Davis Family Funeral Home & Crematory – Walker Brown Chapel. Online condolences and remembrances may be shared at www.DavisFamilyFuneralHome.com.

Keith Cole, longtime Bartlesville resident, died at home Tuesday in Bartlesville. He was 83 years young, a proud U.S. veteran and even prouder husband, father, grandpa and great-grandpa. Keith was a friend to many and a son of the Living God. Keith... View Obituary & Service Information

The family of Keith Cole created this Life Tributes page to make it easy to share your memories.

Send flowers to the Cole family.