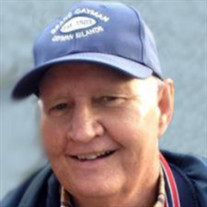 Keith Eastman, 81, of Dewey, died Monday in Tulsa. The life-long sports fanatic and family guy enjoyed the game of life and leaves a legacy of loving memories. Keith was born the son of Richard H. and Quincy (Walton) Eastman on March 5, 1940, in Oglesby, OK, the same home his mother was born in. The family moved to Ochelata where he graduated high school in 1958. Keith formed a passion for sports from a young age, playing first base in baseball and softball throughout his life. Keith worked with his father and brother building houses before starting his 26-year career with Phillips Petroleum Co, finally retiring in 1991. Keith was a loving and supportive father and Pee Paw, attending all the kid’s school and sporting events. He was especially proud of the moment his daughter, Shannon, played first base in the all-state softball game at the Cowboy Hall of Fame in Oklahoma City. If you got in the truck with Keith, you were prepared for taking the backroads, and oftentimes it took twice as long to get there and never did he travel the same road home. He loved casino hopping and always commented on the way home, “At least we got a good meal out of it.” He loved attending NASCAR races and often pulled his camper to them. Once he spotted the Ford car, that was sure to be the one he cheered for, just like when the Oklahoma Sooners were playing. Keith took many trips out to Las Vegas for NASCAR, to visit his brother, and to try to find “the loosest slots around.” New technology was his thing - as far back as huge satellite dish TVs, solar panels and beta VCRs so big he had to build a special cart to move it around the house. Most recently, he loved his cell phone and being able to get ahold of everyone in his life. He always had an outstanding, and often irritating!, ability to guess what his Christmas presents were before he opened them and loved to hide gift cards in big boxes to give as presents. Keith is survived by his children Shannon Eastman, Clint Eastman and Ladonna, and Amanda Eastman; longtime girlfriend Debbie Collings; brother Gerald Eastman and Kay; 4 grandchildren, Carlee Jo Cook and James, Savannah Hayman and Kyle, Brian Dillon and Austin Eastman; and 3 great grandchildren, Trenton, Jemma and Connor. He is preceded in death by his parents, and two sisters Mary Ann Brown and Emma Jo Eastman. Keith’s family will receive friends on Wednesday, from 6-8 p.m. at the Davis Family Funeral Home – Dewey Chapel, 918-534-3030, 113 S. Osage (Hwy. 75), Dewey, Visitation will also be held on Wednesday from 10-8 and Thursday 9-1. Funeral services will be at 2 p.m. Thursday, December 9th, at the Davis Family Funeral Home - Dewey Chapel, with Rev. Don Hazelwood officiating. Interment will follow in the White Rose Cemetery. Services are under the direction of Carter Davis and the Davis Family Funeral Home – Dewey Chapel. Online condolences and remembrances may be shared at www.DavisFamilyFuneralHome.com.

Keith Eastman, 81, of Dewey, died Monday in Tulsa. The life-long sports fanatic and family guy enjoyed the game of life and leaves a legacy of loving memories. Keith was born the son of Richard H. and Quincy (Walton) Eastman on March 5, 1940,... View Obituary & Service Information

The family of Keith Eastman created this Life Tributes page to make it easy to share your memories.

Keith Eastman, 81, of Dewey, died Monday in Tulsa. The life-long...

Send flowers to the Eastman family.