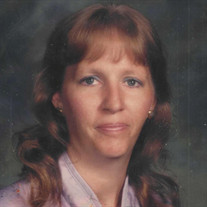 Kenda Hodge, 63, of Bartlesville, died Friday in Bartlesville. Kenda was born the daughter of Ray and Charlene (Johnston) Driver on March 17, 1958. She was raised in Tulsa where she grew up with her best friend and cousin Kristi. Kenda especially loved the many children in her neighborhood and the friendships made. During her school years she was active in swimming and was a Rogers Roper, the pom squad that used lassos in lieu of poms. She graduated from Will Rogers High School with the Class of 1976. Kenda moved her young family to the Dewey area to be closer to Aunt Linda who loved Kenda’s children and was a second mom to them over the years. Kenda loved her kids and did her best to shower them with love and support. Kenda enjoyed her work over the years but her favorite job was at Forrest Manor in Dewey, in Housekeeping and Laundry. There was no doubt she became attached to the many residents there that she helped care for. Kenda was most proud of her children and grandchildren - she was their loudest fan and critic of any referee who might have miscalled a play. Later in life, when her kids camped as adults, Kenda was all in until it was bedtime, then she would head home and come back the next morning. She enjoyed arts and crafts, and everyone was sure to get a special homemade Christmas present every year. Her birthday was always celebrated at Monterey’s for her favorite enchiladas and margaritas. Kenda was not perfect but she was a great mom and grandmother that was dearly loved and will be missed. We love you, Mom! Kenda is survived by her children David (Kristi) Hodge, Dusty (Heather) Hodge, Dawn (Anthony) Smith, and Tiffany (Tommy) Roach; two brothers Rick (Beverly) Driver and Paul (Cynthia) Driver; sister Terri Jones; 19 grandchildren, Addyson, Sydney, Cody, Carrie, Catlynn, Crystal, Ray, Trinity, Gabriel, Silas, Israel, Deacon, Lucille, Noah, Audra, Aurora, Anthony Jr. Jaylen and Tyler; two great grandchilden Blair and Malachi; and many other family members. She is preceded in death by her parents. Kenda’s family will receive friends at the Davis Family Funeral Home & Crematory – Walker Brown Chapel, 918-333-7665, 4201 Nowata Rd, Bartlesville, on Wednesday, from 6-8 p.m. Visitation will also be held Wednesday from 10-8 and Thursday, 9-1. Services will be held 2 p.m. on Thursday at the Davis Family Funeral Home & Crematory – Walker Brown Chapel. Services are under the direction of Carter Davis and the Davis Family Funeral Home & Crematory – Walker Brown Chapel. Online condolences and remembrances may be shared at www.DavisFamilyFuneralHome.com.

Kenda Hodge, 63, of Bartlesville, died Friday in Bartlesville. Kenda was born the daughter of Ray and Charlene (Johnston) Driver on March 17, 1958. She was raised in Tulsa where she grew up with her best friend and cousin Kristi. Kenda especially... View Obituary & Service Information

The family of Kenda Hodge created this Life Tributes page to make it easy to share your memories.

Send flowers to the Hodge family.