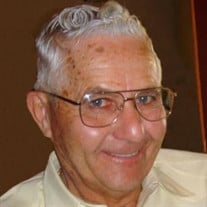 Kenny Dingman, 86, a lifelong resident and local business owner in Bartlesville, Oklahoma, completed the journey to his heavenly mansion on March 9, 2022, while spending his last earthly week at THE JOURNEY HOME, Dewey Oklahoma. Kenny was born November 22, 1935 in Chautauqua, Kansas, to Elmer Woodrow Dingman and Virginia Bell Rector Dingman. As an only child, Kenny lost both of his parents at a young age. At the age of 17, Cecil and Oleta Brooks who owned Brooks Drive-in between Bartlesville, Oklahoma, and Dewey, Oklahoma, adopted Kenny. On June 28, 1960 Kenny opened “Kenny‘s Cafe” at 500 S. E. Comanche, Bartlesville, Oklahoma, and was in the same location for 32 years until he retired in 1992. In 1984, Kenny married Arva Smith Dingman on November 23rd in Las Vegas, Nevada. After retirement, Kenny and Arva purchased a fifth wheel RV and as Kenny always said, “We traveled the world!” Kenny was dedicated to his family, especially his three children. He would say, “I have always tried to be the parent I wish I always had!” According to his children, “He was the best dad in the whole world!” Kenny spent weekends of many years traveling with his family and friends participating in rodeos as a calf roper. After retirement, he taught himself a hobby of making stained glass windows and figurines. You will find a glimpse of his beautiful artistry in the Ochelata First Baptist Church windows. His passion for stained glass craftsmanship can also be found in other churches throughout the Bartlesville/Dewey community. In his latter years, Kenny became very passionate about his faith. He dedicated his life to God on October 12, 2002 and was baptized on October 13, 2002 at the First Baptist Church in Ochelata, Oklahoma. From that day forward, Kenny hit the ground running getting involved in the church. At the age of 69, he volunteered to be the chef at the Falls Creek youth camp. It was his first time ever to go to a church camp. Kenny spent his last 20 years serving the Lord with all his heart. Kenny is survived by his loving wife of 38 years, Arva Dingman; children: Susan E. Powers, and husband Dar, Donna J. Metcalf and husband Lewis, daughter-in-law Lee Ann Dingman, step-daughter Rhonda Nodine and husband Mike, step-son Bobby Smith and wife Serena, and step-son Dale Smith and wife Brenda;15 grandchildren: 32 great-grandchildren; and a host of other family and friends. He is preceded in death by his parents; adoptive parents, Cecil and Oleta Brooks; son, Cecil Dingman; and great-grandson, Kade Minor; and step-great-grandson, Alex Parrett. In lieu of flowers, the family requests a donation to THE JOURNEY HOME, 900 Washington Blvd, Bartlesville, OK 74006, www.thejourneyhomeok.org. Services will be held 10 a.m. on Monday, at the Ochelata First Baptist Church, with Pastor Bill Spencer officiating. Interment will follow in the Ochelata Cemetery. Services are under the direction of Carter Davis and the Davis Family Funeral Home – Dewey Chapel. Online condolences and remembrances may be shared at www.DavisFamilyFuneralHome.com.

Kenny Dingman, 86, a lifelong resident and local business owner in Bartlesville, Oklahoma, completed the journey to his heavenly mansion on March 9, 2022, while spending his last earthly week at THE JOURNEY HOME, Dewey Oklahoma. Kenny was born... View Obituary & Service Information

The family of Kenneth M. Dingman created this Life Tributes page to make it easy to share your memories.

Send flowers to the Dingman family.