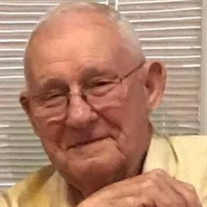 Kenneth Lee McNeice of Dewey died Sunday in Bartlesville. The Navy veteran was 85 and a widely respected firefighter, faithful follower of Christ and loving family man. Kenneth Lee McNeice came into this world on November 3, 1935, the son of Don K. McNeice and Edna (Cathey) McNeice. Kenneth was born and raised in Wichita, KS, and graduated high school at Wichita West in 1953. Shortly after high school he joined the United States Navy, where he served as a machinist mate. He proudly served his country and was honorable discharged in 1958. Coming home after the service, he went on to marry the love of his life Wanda (Heritage) McNeice. Together the two would have three boys, Don, Scott, and Gary. Kenneth raised his boys to become fine gentlemen just as he was and for them to carry on his legacy of honor, courage and commitment. Kenneth joined the Wichita Fire Department and became widely respected as an extraordinary fireman. He was a great example of what a firefighter should be and eventually retired in 1978 as a Captain. Kenneth was an active church goer and had several jobs that he handled at the Dewey First Church of the Nazarene. If anyone knew Kenneth, they knew his greatest desire would be for everyone to have a loving relationship and to be right with the Lord. He was a perfectionist and always took his work to heart. His family was the most important aspect of his life. He cherished his three boys, grandchildren and great-grandchildren. They would spend the day together shooting, cracking jokes and making memories. His family was modeled on his leadership, integrity, and passion for the Lord. He is preceded by his parents and sister Janette McNeice. He is survived by his wife of 62 years Wanda McNeice; sons Don and wife Robin McNeice, Scott and wife Stephanie McNeice, Gary & Mariah McNeice; two sisters Ruth Everhart, Karen Leatherman; grandchildren Jeremy and Caitlin McNeice, Lindsey and Jason Cunningham, Allyson Todd, Andrea and Phillip Knight, Mallory and Kyle Thomas, Clay McNeice, Nolan McNeice, Dahlia McNeice, Bella McNeice, 10 great -grandchildren, and numerous nieces, nephews, cousins and a host of friends and loved ones. A Celebration of Life Service will be held on Saturday, February 27, 2021 at 1:00 p.m. at Dewey First Church of the Nazarene. Arrangements are under the direction of Carter Davis and the Davis Family Funeral Home – Dewey Chapel. Online condolences and remembrances may be shared at www.DavisFamilyFuneralHome.com.

Kenneth Lee McNeice of Dewey died Sunday in Bartlesville. The Navy veteran was 85 and a widely respected firefighter, faithful follower of Christ and loving family man. Kenneth Lee McNeice came into this world on November 3, 1935, the son of... View Obituary & Service Information

The family of Kenneth Lee McNeice created this Life Tributes page to make it easy to share your memories.

Kenneth Lee McNeice of Dewey died Sunday in Bartlesville. The...

Send flowers to the McNeice family.