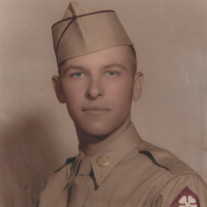 Kenneth Earl Wilkins, resident of Copan, OK passed from this life on Saturday, April 6, 2019 at the Jane Phillips Medical Center in Bartlesville. He was 88 years of age. Kenneth was born October 21, 1930 in rural Osage County near Ralston, OK to Orville A. and Laura M. (Kirk) Wilkins. His early years were spent near Ralston before the family moved to Terlton, OK where he continued his education, graduating from Terlton High School. Following high school, Kenneth enlisted in the United States Army, serving in Korea. In 1957, Kenneth was married to Barbara Treece. They were divorced in 1967. On July 6, 1972 Kenneth was united in marriage to Nina June Ashwood Franklin in Miami, OK. They made their home in Prattville, OK where he owned and operated a plumbing business. After Kenneth sold the business, they moved to South Coffeyville, OK and then to Copan in 1993. Besides his plumbing business, Kenneth was engaged in farming. He also enjoyed gardening and going to flea markets where he picked up the nickname as “the junkman”. Those that survive include his wife Nina of the home; children, Kenneth R. “Randy” Wilkins and wife Judy Kay of Cleveland, TN, Stanley W. Franklin and wife Nikole of Bartlesville, Stephanie Ann Franklin of Wichita, KS, Nancy E. Burdick and husband Roger of Coffeyville, KS, and Jenifer J. Miller and husband Barry of Bartlesville. Also surviving are three sisters, Pauline, Ella and Faye; as well as six grandchildren. Kenneth was preceded in death by his parents, daughter Christia D. Wilkins in 1966, nine brothers and sisters. Visitation will be held from 10 AM – 8 PM on Wednesday, April 10, at Davis Family Funeral Home – Dewey Chapel, 918-534-3030, 113 S. Osage (Hwy. 75), Dewey. Funeral services for Kenneth will be held at 11:00 AM on Thursday, April 11, at the Davis Family Funeral Home – Dewey Chapel. Graveside services will be at 2:30 PM April 11 in the Woodland Cemetery, Cleveland, OK with full military honors. Honorary pallbearers are Wayne Wilkins, Samuel Burdick, Christopher Burdick, Michael Miller, Joshua Miller, Wesley Franklin, Daniel Franklin and Katy Franklin. Services are under the direction and care of Carter Davis and the Davis Family Funeral Home – Dewey Chapel. Online condolences and remembrances may be shared at www.DavisFamilyFuneralHome.com.

Kenneth Earl Wilkins, resident of Copan, OK passed from this life on Saturday, April 6, 2019 at the Jane Phillips Medical Center in Bartlesville. He was 88 years of age. Kenneth was born October 21, 1930 in rural Osage County near Ralston, OK... View Obituary & Service Information

The family of Kenneth Earl Wilkins created this Life Tributes page to make it easy to share your memories.

Kenneth Earl Wilkins, resident of Copan, OK passed from this...

Send flowers to the Wilkins family.