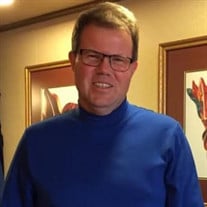 Kennith Dale Patterson, a long time Bartlesville area resident, went home to be with the Lord at the age of 57 from Bartlesville, Oklahoma on Friday, February 18, 2022. “Dale”, as his friends knew him, was born the son of Kennith Wayne Patterson and Erla Patterson Neely on August 6, 1964, in Alexander City, Alabama, and so, grew up in the South. He enjoyed being with his grandparents, Mama and Papa Patterson and Clyde and Lois Woodfin. His family moved to Bartlesville when Dale was in junior high and he graduated from Bartlesville Sooner High School with the Spartan Class of 1982 (the last year before Sooner merged with College High School). Dale’s fascination with weather and nature led him to further his education at the University of Oklahoma in Norman where he studied Meteorology. After college, he returned to Bartlesville and worked for Art Gorman at Gorman Construction and, with encouragement from Art, he obtained his Mechanical Contractor’s License in Heating and Air during this time. One hot summer day, on a routine maintenance call, Dale met Debra Sue Mercer while he was performing maintenance at one of Gorman’s apartment complexes. Debra’s offer of a cool glass of green tea began what would become his and Debra’s lifelong love story. They dated and later were joined in marriage on September 27, 1997. In April 2004, Dale went to work at Woolaroc Museum and Wildlife Preserve in Osage County, Oklahoma. There, amidst the woods, lakes and rocks of the Osage Hills, the couple made their home for many years and together they enjoyed their deep love of the outdoors. Dale felt blessed to work at Woolaroc as a Maintenance Engineer under God’s blue skies. He was also kept busy with the numerous community events staged at Woolaroc such as Kidfest and the OK Mozart Music Festival. And, yes, he even enjoyed the painstaking efforts to prepare each Christmas season for Woolaroc’s Wonderland of Lights. Dale also served as Treasurer of the Osage County Water District #5 from 2006-2008. In 2008 he began his 14-year term as its President/Chairman. One of the perks of living at Woolaroc was the many acres of meadows and trails where Dale and Debra could practice for the long distance running which they both participated in. Actually, long distance running was Debra’s passion and Dale, having been a long-distance runner in high school, made his wife’s passion his own passion, and took it back up. Between the two of them, they ran numerous 5k’s and 10k’s, the Woolaroc 8k and half marathons. For many years, Dale ran in the Turkey Mountain 5 Mile Trail Run, and Debra joined him last year as a 2-mile trail runner. Dale also ran several marathon races and participated in a Spartan Obstacle Course Race. Dale was an avid disc golfer and competed at the professional level. He holds a Professional Disc Golfers Association record for Most Time Aloft which still stands today. He was active in the Bartlesville Disc Golf Club and volunteered his services for workdays and course design consultations for many other disc golf clubs. His love of the sport led to him becoming a Tournament Director with Debra assisting him at local tournaments. Every two years, Dale held a special disc golf tournament at Woolaroc which was loved by all who attended. Dale and Debra loved to travel and, apart from their travel to the golf tournaments, they also enjoyed many travel adventures, especially their trips to Alaska and Venice, Italy and hiking in many of the National Parks. He was also an animal lover and, together with his wife, he adopted many animals through the Animal Rescue Foundation in Bartlesville. Active in the ministries of his home church, Dale traveled with other members of The Light Church Fellowship on a mission trip to Haiti and on several Israel Study Tours with Pastor David Oaks and one Study Cruise which visited biblical sites in Turkey, Greece and Italy. Dale is survived by his wife, Deb, his mother Erla and her husband, Ives; his stepmother, Anita Patterson; his sister Sharon Patterson and brother DeWayne Patterson. He was preceded in death by his father and by both maternal and paternal grandparents. Dale was a man who loved his family and was faithful to God, his wife and his church. Services will be held on Tuesday, May 3, 2022, at Woolaroc Clyde Lake. The front gate at Woolaroc will open at 12:00pm and close at 1:00pm. The only area open at Woolaroc will be Clyde Lake. The service will begin at Clyde Lake shortly after 1:00pm. Anyone not through the gate by 1:00 will not be allowed entry. Services are under the direction of Carter Davis and The Davis Family Funeral Home and Crematory-Walker Brown Chapel. Online condolences and remembrances may be shared at www.DavisFamilyFuneralHome.com. Flowers and plants for the memorial can be sent to Davis Family Funeral Home. In lieu of flowers a donation may be given to "The Israel Fund," a fund established to assist needy Israeli families. Please make checks payable to: The Light Church Fellowship, P.O. Box 3261 Bartlesville, OK 74006 and include return address information where you can receive a receipt for your donation and note on your check "The Israel Fund-In memory of Dale Patterson." Donations may also be made to Bartlesville Disc Golf Club, 2115 Turtle Creek, Bartlesville, Ok 74006.

Kennith Dale Patterson, a long time Bartlesville area resident, went home to be with the Lord at the age of 57 from Bartlesville, Oklahoma on Friday, February 18, 2022. &#8220;Dale&#8221;, as his friends knew him, was born the son of Kennith... View Obituary & Service Information

The family of Kennith "Dale" Patterson created this Life Tributes page to make it easy to share your memories.

Send flowers to the Patterson family.