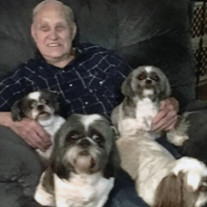 Larry Franklin Gravett, 85, of Bartlesville, went home to be with his Lord and Savior on Saturday, February 12, 2022. Larry was born on January 20, 1937, in Humnoke, Ark., to Albert “Buddy” Lee Gravett and Laura Marie (Mason) Gravett. Larry and his three brothers, Bob, John, and Carroll were raised on a cotton farm in Humnoke, where Larry graduated high school in 1956. After graduation, he and a group of his friends went west to Bell Gardens, Calif., where Larry met the love of his life, Norma Jeannette Smith. Larry worked at Armstrong Flooring for 40 years before retiring. In 1997 Larry and Norma moved to Bartlesville to be closer to their family. Larry enjoyed camping, panning for gold and playing cards, but his favorite pastime was spending time with his 5 Shih tzu dogs, Misty, Chloe, Sassy, Bambi and Buddy. Norma has fond memories of deep-sea fishing off the California coast with Larry, during their younger years. Larry gave his heart to the Lord a few days prior to his passing, Feb. 4, but even before that time, Larry encouraged his family members to attend church. He was an honest man who lived by high moral standards. He was always willing to help others. Larry was hard-working and took good care of his family, whom he loved dearly. He will be greatly missed. Larry’s survivors include his beloved wife, Norma J. Gravett of Bartlesville; children, Valerie J. Songer of Independence, Kan., Donna M. Gravett of Bartlesville, and Larry P. Gravett of Bartlesville; brothers, Bob Gravett and wife Marie of Arkadelphia, Ark., and John Gravett and wife Jean of Humnoke, Ark.; sister-in-law, Claudia Gravett of Maumelle, Ark.; grandchildren, Ronda Songer Bradbury and husband Max of Independence, Kan., Doug Songer and wife Shyra of Katy, Texas; great-grandchildren, Anthony Siebels, Ali Bradbury, Zac Bradbury, all of Independence, Kan., and Harmony Songer, Jade Songer, Cadence Songer, all of Katy, Texas; and numerous other family members and friends. In addition to his parents, he was preceded in death by his brother, Carroll Gravett. Larry’s family will receive friends from 6-8 p.m. Thursday, February 17, at Davis Family Funeral Home – Dewey Chapel, 918-534-3030, 113 S. Osage Ave., Dewey, OK 74029. In addition, come and go visitation will be held from 10 a.m. to 8 p.m. Thursday and from 9 a.m. to 1 p.m. Friday. Services will be held at 2 p.m. Friday, February 18, at Davis Family Funeral Home – Dewey Chapel with Reverend James Biesiadecki officiating. Pallbearers will be Larry’s grandsons, Doug Songer, Anthony Siebels and Max Bradbury; and friends, Kevin Dray and Wendell McWhorter. Interment will follow at Dewey Cemetery. Services are under the direction Carter Davis and staff at Davis Family Funeral Home – Dewey Chapel. Online condolences and remembrances may be shared at www.DavisFamilyFuneralHome.com.

The family of Larry Franklin Gravett created this Life Tributes page to make it easy to share your memories.

Larry Franklin Gravett, 85, of Bartlesville, went home to be...

Send flowers to the Gravett family.