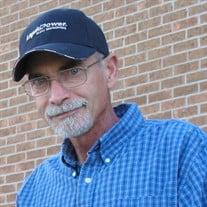 Larry D. Stierwalt, 72, longtime area resident, died Saturday at his home in Dewey, OK. He was a proud U.S. veteran, gifted artisan and craftsman, and a family man. “Life isn’t about waiting for the storm to be over; it’s about learning to dance in the rain!” is a quote that meant very much to him. Larry was born the son of John Kenneth and Helen M. (Smallwood) Stierwalt on Dec. 7, 1949, in Coffeyville, KS. His early years were spent in Tyro and Coffeyville, then later Wichita, KS, graduating from Wichita West High School in 1967. He furthered his education at Coffeyville Community College, earning an Associate of Arts degree in 1969. Larry worked as a draftsman with McGraft Engineering and Allis-Chalmers Industrial Tractors in Topeka, KS, before enlisting for four years in the U.S. Navy 1970-’74. His service included boot camp in San Diego, CA; photo school in Pensacola, Florida; two years in Pearl Harbor Pacific Fleet Intelligence Center; and the remaining time with USN Anti-Submarine Air Squadron VS-33 in San Diego; and one day at sea. After his honorable discharge with rank of Petty Officer Second Class Photographer’s Mate, Larry returned home and married the love of his life Cathy Sandbothe of Neodesha, KS, on Oct. 12, 1974, at the Tyro, KS Christian Church. From 1974 to 1996, Larry worked at Phillips Petroleum Co. as an illustrative draftsman and master exhibit tech, building exhibits and displays for petroleum trade shows. He went on to work at Service Manufacturing Corp from 1996 to 2014 as exhibit builder and senior mechanical tech, building exhibits, platforms, and containers that housed pumping equipment for oil fields. Throughout their marriage, Larry and Cathy enjoyed country dancing, co-ed sports, working on the farm and raising a few calves. Fishing was a passion for him, and he was a skilled and creative woodworker, making many toys and art pieces to give away. Larry will be dearly missed by many, but especially by his grandchildren. He was enormously proud of his grandchildren and loved to play games with them, share his joy of fishing, and teach them to drive the tractor. Larry is survived by his loving wife of 47 years Cathy; two children, Sara Brown & husband Chad, and Daniel Stierwalt & wife Lori; grandchildren Kate, Ally, Landyn, and Trenton; brother Robert Brooks, sisters Julie Hale & husband Brian, and Carol Legrand & husband Darren; and many nieces and nephews. He is preceded in death by his parents, grandson Riley Daniel Stierwalt, brother Kevin Stierwalt, and grandparents Marlow and Gladys Smallwood. The family will receive friends for visitation at the Davis Family Funeral Home & Crematory – Walker Brown Chapel, 918-333-7665, 4201 Nowata Rd, Bartlesville, on Sat, April 9 from 3-5 p.m. Visitation will also be held Sat. from 10-5 p.m. Services are under the direction of Carter Davis and the Davis Family Funeral Home & Crematory – Walker Brown Chapel. Online condolences and remembrances may be shared at www.DavisFamilyFuneralHome.com.

Larry D. Stierwalt, 72, longtime area resident, died Saturday at his home in Dewey, OK. He was a proud U.S. veteran, gifted artisan and craftsman, and a family man. &#8220;Life isn&#8217;t about waiting for the storm to be over; it&#8217;s about... View Obituary & Service Information

The family of Larry Dean Stierwalt created this Life Tributes page to make it easy to share your memories.

Send flowers to the Stierwalt family.