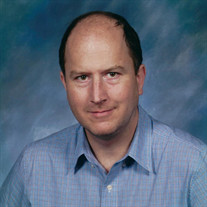 Layne Emmett Johnson, 52 of Bartlesville, OK, entered eternity with Jesus on Thursday evening, April 22, at the Forrest Manor Nursing Center in Dewey, OK. His last days were with caring family, friends and pastor by his side. Born in Jane Phillips Hospital of Bartlesville on May 2, 1968, Layne is the son of Howard H. Johnson and Phyllis (VanMeter) Johnson. Raised in a happy, God-fearing home in the Osage Hills of rural Bartlesville along with three brothers, Layne received Christ Jesus as his Savior and Lord at a tender age and was baptized at 1st Assembly of God Church of Bartlesville by Pastor Robert Polvado. Layne continued in his walk of faith through Sunday School, Royal Rangers, Christ Ambassadors and Chi Alpha, augmented by hours of Bible reading, memorization and prayer, reinforced by Godly parents. This firm foundation saw him through life’s maladies and challenges to the end. Gifted in many areas, Layne loved and excelled in music, singing and playing the piano and trombone at church and school, performing publicly as a soloist, in concert and marching band, plus Christian ensembles. An athlete, Layne liked playing baseball, softball and football, but mostly loved playing basketball at school, home and wherever there was a pick-up game. Layne was also adept memorizing statistics of professional sports figures and teams. Layne was a proud Dewey Bulldogger graduating in 1986, then studied at NEO A&M in Miami and Oklahoma State University in Stillwater. Layne’s travels were extensive, living in several towns in Oklahoma, Kansas, Arkansas and Missouri, and abroad in Norway. Layne loved the food and fellowship of family reunions, church dinners and youth outings, but preferred the great home-cooking of his mother. Layne enjoyed playing board games, but his favorite activity was laughing, singing quartet music and reminiscing with his father and brothers, who will miss him deeply. Layne is survived by his parents Howard and Phyllis Johnson of Bartlesville; his brothers Michael H. Johnson and his wife Jeannie of Albuquerque, NM; H. Mark Johnson and his wife Vickie of Bartlesville; and Leland C. Johnson and his wife Cherie of Trophy Club, TX; seven nieces, seven nephews, three great-nephews and seven great-nieces from Oklahoma, New Mexico, Alabama and Texas; Uncle Dale VanMeter and his wife Iris of Thayer, KS; Aunt Ruth (Vaughn) VanMeter of Parkville, MO; Uncle Roy Carson of Chandler, AZ; Aunt Leila Mae (Johnson) Williams of Mesa, AZ; 44 cousins, with droves of 2nd cousins and their children. Visitation will be held on Wednesday from 10-8, friends may sign the register at the Davis Family Funeral Home – Dewey Chapel. In lieu of flowers memorials may be made to the Revival Time Outreach Center, 101 S Virginia Ave., Bartlesville, OK 74003. A Memorial Celebration will be held 3 p.m. on Thursday, at the Revival Time Outreach Center, 101 S Virginia Ave., Bartlesville, OK 74003, with Pastor Bruce Ganze officiating. Graveside services will be held in the Ross Cemetery – Neodesha, KS. Services are under the direction of Carter Davis and the Davis Family Funeral Home – Dewey Chapel. Online condolences and remembrances may be shared at www.DavisFamilyFuneralHome.com.

Layne Emmett Johnson, 52 of Bartlesville, OK, entered eternity with Jesus on Thursday evening, April 22, at the Forrest Manor Nursing Center in Dewey, OK. His last days were with caring family, friends and pastor by his side. Born in Jane... View Obituary & Service Information

The family of Layne Emmett Johnson created this Life Tributes page to make it easy to share your memories.

Send flowers to the Johnson family.