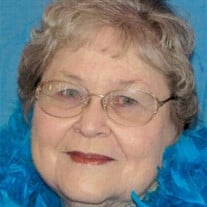 Lela Kunze passed away Monday, October 17, 2016. Services will be held at 10:00 a.m. Thursday, October 20th in the Walker-Brown Funeral Home Chapel. Interment will be at 3:00 p.m. in the Rosedale Cemetery in Ada, OK. Arrangements are under... View Obituary & Service Information

The family of Lela Christine Kunze created this Life Tributes page to make it easy to share your memories.

Send flowers to the Kunze family.